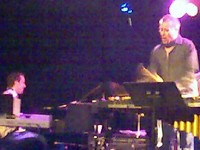 Joe Locke, who hails from Rochester and wowed the crowd at Montage Grille with a smokin set at this year's Rochester International Jazz Festival, brought his A-game in on Thursday, December 7th, in another jazz show at Water Street Music Hall with pianist Geoffrey Keezer, Rueben Rogers on bass and Terreon Gully on drums. This was one of those shows that you just sit while the artists trade solos and marvel at just how good they are.  Keezer, who played with Art Blakey's Jazz Messengers at the tender age of 17 and has played with a lot of other jazz legends, played his piano and keyboard (sometimes simultaneously) with incredible speed, inspired comping that highlighted the soloist's playing without coloring it, and a shimmering tone (that may have had more to do with the way it was mic'd).  Gully alternated between quiet finesse and sheer power with ease.  Another in a long line of incredible drummers that have passed through Rochester in the past few years.  Rueben Rogers's bass, both electric and standup, kept the whole outfit in drive.  And then there was Locke, with a manic manner in attacking the vibes, sometimes looking like he was playing Whack-A-Mole, jumping and jiving, but showing why he is considered the best jazz vibraphonist out there.  It was just a great night of music.

I also had a few other chance meetings that made the night special.  I was able to meet up with Tom Marcello, Locke's manager and friend since they were in their teens in Rochester and commented recently on this blog.  I also shared my table with Paul (didn't get your last name), an older gentleman who was a hoot to spend some time with.  He had some memories of going to see  jazz at the Pythodd and other long gone places in Rochester's rather rich history of jazz.  I also had a chance to meet Derrick Lucas whose Spectrum show at WGMC I've caught a few times, but found that he also has studied Rochester's jazz history.  Good night all around.

It was nice to finally meet you and talk Greg, and I'm glad you enjoyed the show.

Let's hope that there are many more times to get together.

Sorry about the delay in responding to your Comment, Tom. As I wrote, the night was great all around. Great jazz and meeting new people. Hope to see you around too and have more opportunity to talk.