About Contact Us ROC Jazz Artist Sites Info for Musicians & Venues JazzRochester T-Shirts
Yes, I still have a turntable (and a CD player), but what's playing on it?
All things Jazz@Rochester

Swing has sprung . . . Victor Goines Quartet brings on some heat at VENU 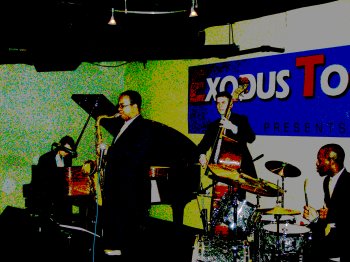 and they really heated up the place.  Dianna and I made the late show with some friends. Goines and crew, which included fellow LCJO member Dan Nimmer (piano), Matt Rybicki (bass) and Ulysses Owens (drums), really tore it up.  All but Nimmer were former students of Goines at Julliard, where he is head of jazz studies, and their performances clearly showed that Mr. Goines has some skills in the teaching area, especially Owens.  Nimmer's piano at times sounded orchestral and he in places would go to almost a whisper before announcing a swinging climax with a pounding chord.

Jose DaCosta, the man behind the Exodus to Jazz series is serious about the music. Where other music promoters might be working the crowd and making sure of the details, DaCosta was with the rest of us, lost in the swinging groove that Goines and his crew were digging.  He didn't have to enforce his "whisper-only" policy as everyone in the house was listening, interrupted only by drink orders and exclamations when a solo became particularly exciting or the emotions brought up by the music became a bit too much to bear (my wife was especially vocal in her approval).  This series is consistently one of the best things going in Rochester, jazz-wise, and I recommend that you check it out.   DaCosta brings in top-notch artists and the venue is well suited for what his series is all about—enjoying jazz and those who make it.