Lessons Learned in Day Two of the RIJF

As I noted in my "Da Jazz" podcast with Seth and Ken, the second day of the Rochester International Jazz Festival didn't quite gel as well as the first.  However, that's not an uncommon occurrence when you're attending a 9 day festival that has you going non-stop from around 4pm until the wee small hours of the next morning.  Of course, you hope the fatigue doesn't catch up with you on the second day—but it did. One thing I can say is that the programming by the RIJF staff this year, adding the additional start times and multiple "middle section" time slots between the 6:00 and 10:00 pm shows allows more flexibility in planning.  My bud Seth has explored the reasons this works in his post for the second day of the fest over at Cup O' Jazz.  Ken also has another perspective, as does Seth. Netsky and De Blase at City Newspaper also have their takes on the day.

One of the catchwords for my day was crowds and how to avoid letting them get in the way of hearing the music you want to hear.  They and my early onset fatigue were to blame for my feeling that the evening didn't completely gel. 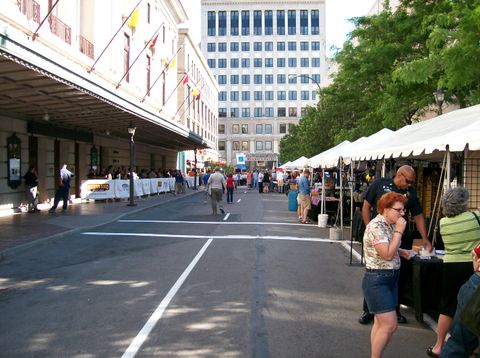 Most of the day did gel. Day Two started out great with the Randy Brecker Quintet featuring his wife Ada Rovatti on saxophone, Randy Brecker on trumpet, Steve Johns on drums, Steve La Spina on Bass and David Kokoski on piano.  The rhythm section was tight, with Kokoski repeatedly taking solos that just kicked butt. Ada Rovatti is a fine sax player and a number of the pieces in the 6:00 pm set were her compositions.  I left there and headed over to see Zanussi 5, part of the Nordic Jazz Now series, over at the Reformation Lutheran Church.  Much has been written or podcast about this group and their performances, so I'll leave it to others.  I just didn't know saxophones could make noises like that . . . .

It was here where things started to come apart a little. I went "next door" to the Harro East venue to catch some of Tiempo Libre.  Leaving there at 9:00pm after seeing probably half or more of their blazing set, I set out for Gibbs Street for some street meat via a "quick peek" at the Los Lonely Boys on East and Chestnut.  That's where I blew it.  I ended up wading through a crowd for 20 minutes just to get to the food vendors on Gibbs and really not being able to see or hear much of the band. By the time I had my hot dog and began walking toward my next venue, High Fidelity to see singer Tessa Souter, I was later than I wanted to be and found no place to sit or really even to stand.  Taking a place on the wall near the bar, I heard a few of the songs in her set before the noise coming from a group near me and from the exit area, plus the discomfort of standing there, compelled me to leave.  However, rather than checking my program for alternatives, I just walked back to the car and headed over to the after hours gig early.