About Contact Us Join Our Email List ROC Jazz Artists Info for Musicians & Venues Livestreams
Wynton Talks About Congo Square on Tavis Smiley
Mosey on Down the Road . . . It's Jazz Fest Time in Syracuse! 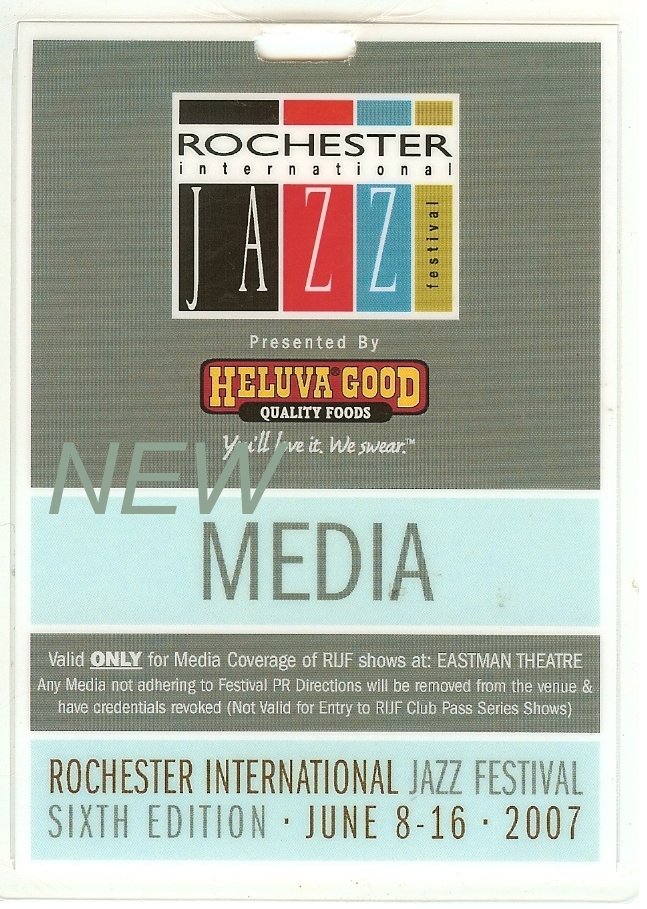 During the 2007 Rochester International Jazz Festival, the traditional media in Rochester continued their flirtation in using social media tools to reach additional readers. The "alternative" newspaper City Newspaper incorporated the RIJF into the music "blog" they started last year. The daily Democrat & Chronicle also had a "blog" (although the critic's podcast that they ventured last year did not return).

I use the term "blog" here loosely.  Both are called "blogs" and bear a resemblance to a blog in that they have posts in reverse chronological order, written in a less formal and "personal" style, and monthly archives. However, that is where the resemblance ends. The problem is that there is no "social" in their "social media." They never really joined the conversation and community that was forming around this year's RIJF, content to just continue to write articles that could have just as well been published in print.

Our merry little band of bloggers and podcasters (Seth, Ken, Jason, Tracey, Jane and others) wrote about the 2007 RIJF, published photos, linked to and commented in each others blogs. That's how we originally found each other (Ken and Seth have been blogging the RIJF for much longer than I have). This year we really started to form a community online.  We also linked to and sent trackbacks to both the D&C and City Newspaper blogs, in part as an attempt to draw them into the community, but mostly because they were providing different perspectives on the artists we were hearing (and hearing artists we weren't) and we wanted our readers to be exposed to yet other sources for information about the RIJF.  I can't speak for the other, but I held back an impulse to not link to the D&C and City Newspaper blogs.  It seemed to me that they were either not interested or couldn't be bothered with joining our conversation or leading their readers to the many other voices covering the RIJF. The fact is that the writers in the D&C and City Newspaper blogs were using their credentials to gain access to artists that I didn't have (to be fair, however, it is probably that I didn't take advantage of the access I had). Although I had a media pass, I never really felt in the club and often felt like I didn't know the secret handshake. Oh, and then there's that pesky day job in legal publishing, the 20+ years of age, and a body that really shouldn't be staying out until after 1 or 2 am for 9 days straight.  The access (and stamina) of the young D&C "bloggers" Anna Reguero and Jann Nyffeler (except for one post by the more veteran reporter Jack Garner) resulted in some interesting and, at times, compelling, writing about the artists and their experiences of the RIJF that I wanted to share with my readers. That's one reason I blog—to aggregate the sources of information that are available about the subject I'm passionate about, i.e., live jazz music here in Rochester. However, if you look at the D&C or the City Newspaper "blogs" the only links you'll find in the D&C blog are those in the few comments or trackbacks that I (and perhaps one other) left on them (City has some more comments, but is also linkless). Why is that?

While it may just be inattention, I think it is more about not really "getting" it.  By not joining the conversation and community that is developing, the D&C and City Newspaper are squandering one of the best tools for being "found" and read on the Internet—the blog. The choice may have been conscious or not and may partly be a result of the fear that traditional media have of the inroads being made by us in the blogosphere into what was once their sole province.  As we tell blogging clients, the conversation will be going on with or without you.  It would be so much more interesting for all of our readers if it's the former rather than the latter.

Hey, Greg!
True words you've spoken, Greg. I am going out on a limb here and saying something that I hope I don't regret. I don't consider someone who makes their living reporting for a paper to be a blogger (even if that's what their paper calls their column) in the truest sense of the word. I (and you, Ken, and Seth) can pretty much write what we feel. We are not writing to please anyone but ourselves. We are not writing for a paycheck--no one is paying us to give our (read as "their") opinion, so we are true bloggers. Diary-keepers. Journalers--not journalists. Anyway, that's my two-cents on that.

Great to see you and meet Ken last night; thought I'd get the chance to meet Seth, and then the stars aligned differently and we spent the rest of the time sitting with Gene while he ate his ice cream! It was cool. Joe bought his music store from a guy who studied with Gene, so they know each other slightly, and the other guy who came over and sat with us (drummer, Bill Blind) knows Gene fairly well. We hung out until way too late for us "over 20-somethings" and helped him get his gear back up to his room. I had walked up to Gene after he was done and the band had left, and I told him how beautiful his music was and how embarrassed I was that so many people were talking through it. Cell phone woman on the sofa, clapping man with the chatting women behind my left shoulder--I shot them a look a couple of times and they got the message for a minute. What is wrong with people? Is it only in Rochester that we have no social graces when we go to see performances or is it like that everywhere? It was downright embarrassing. Jonathan Kreisberg mentioned it three times in his second set that first night of the Jazz Fest. It was bad enough that he had to mention it once. But that didn't stop people--not even the third time.

We can't go back tonight because Joe's got a gig, but we are going to his concert on Tuesday at Nazareth, I think. Maybe we'll see you there?
Tracy

More people who don't "get" the blogging thing: here's an article linked to on kottke as 100 blogs ABC News loves so much, they didn't link to a single one.