About Contact Us ROC Jazz Artist Sites Info for Musicians & Venues Buy a T-Shirt!
Diane Schur at Nazareth to support Lifetime Assistance
Eric Person and Meta-Four are next up in Exodus to Jazz series . . .

A new jazz festival in my old stomping grounds . . . .

As you may or may not know, almost 25 years ago I graduated from the College at the University of Chicago. Hyde Park, the neighborhood in Chicago in which the University is found holds a special place in my heart, but alas not in my ear. One thing that was missing while I lived there in the early 1980s was live jazz. OK, full disclosure, I wasn't really listening to much jazz then, more along the lines of the Sex Pistols and the New Wave stuff at that time, but it was starting to make some preliminary inroads into my listening habits. 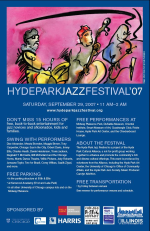 So, NOW they start getting more jazz in town.  This year the community is hosting the first annual Hyde Park Jazz Festival. The festival will be held at multiple venues in Hyde Park on Saturday, September 29, 2007, 11 amâ2 am. It is being produced by the Hyde Park Cultural Alliance, The University of Chicago, and the Hyde Park Jazz Society, and will provide musical trolleys (OK, I want to know what a "musical trolley" is, too) for moving attendees around Hyde Park to a variety of creative and unexpected music and food venues.

The lineup is a who's who of national and local Chicago jazz talent, artists I fondly remember hearing in the years before leaving Chicago for Western New York, including: Dee Alexander, Orbert Davis, Clark Terry and Willie Pickens Trio, Bill McFarland and the Chicago Horns, Judy Roberts (a former neighbor of mine), Corey Wilkes, Jimmy Ellis and others. Heard Kurt Elling (who lives in Hyde Park) was going to be there, but apparently scheduling conflicts kept him from the hometown stage. So, on the off chance that you're going to be in Chicago next weekend, you should check it out.

So what does that have to do with jazz in Rochester?  Not much (well, it's about jazz, isn't it). But in addition to publishing this blog and other things, I also wear the hat as the current President of the University of Chicago Club of Western New York and I'm just giving them a hand on letting alumni around here know about this festival.  There are close to 800 of them out there in the WNY region.  If you're reading this and want to be informed of alumni events from time to time, you can send me an email through the link in the left panel, or visit the blog I built for the local alumni group: "The Quad Club by the Thruway".