About Contact Us ROC Jazz Artist Sites Info for Musicians & Venues Buy a T-Shirt!
Support your local jazz station . . . become a member of Jazz 90.1
It's Wednesday night . . . do you know where your jazz is?

Leading a new quartet, drummer Sylvia Cuenca is returning to the Exodus to Jazz series to help ETJ promoter Jose DaCosta and ETJ celebrate its first anniversary at Club VENU on Saturday, Oct. 27, 2007, for two shows. It was one year ago that Ms. Cuenca and her previous group appeared in the first Exodus To Jazz show on Oct. 26, 2006. As noted in a recent article by Anna Reguero in the D&C (link will probably "dissolve" in a few days, but if you get there fast...), Sylvia Cuenca's repeated returns to Rochester (she played here with the late Hilton Ruiz during the 2005 RIJF—I saw that show and was really impressed by her intensity and range—and with Tessa Souter this year) have resulted in a "nice buzz" surrounding her appearances here.  That's good as she has pretty impressive chops. 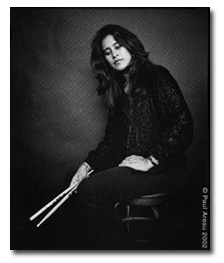 Although Sylvia Cuenca isn't a household name, she is an accomplished and prolific drummer with an amazing resume. She has spent over 17+ years playing with legendary trumpeter Clark Terry, and has appeared with other jazz majors like Billy Taylor, Frank Foster, Kenny Barron, Eddie Henderson, Michael Brecker, Hilton Ruiz, Marion McPartland, Diane Reeves, Houston Person and Etta Jones, as well as rising stars like Souter and Denise Thimes. Her companions in the quartet are no slouches either. David Gilmore has performed with Wayne Shorter, Dave Douglas, Muhal Richard Abrams, Sam Rivers, Steve Coleman, Don Byron, Cassandra Wilson, Uri Caine, Randy Brecker and David Sanborn and has sat in on over 50 recordings. Seamus Blake is a long-term member of the Mingus Big Band and has performed with the Victor Lewis Quintet, Bill Stewart and Kevin Hays, Franco Ambrosetti, Billy Drummond, Darrell Grant and Kevin Hayes, John Scofield. Jared Gold, who played in Cuenca's prior group, and will be returning playing his Hammond B-3, has performed with Bill Goodwin, John Snyder, Ralph Bowen, Ralph Peterson, John Swana, Javon Jackson, and Tony Reedus.