This is a big one . . . Mulgrew Miller comes to Exodus to Jazz!

Mulgrew Miller is coming to Rochester and continues the outstanding Exodus to Jazz Series on Saturday, November 3rd. Miller is one of the leading jazz pianists out there today, having been on more 400 recordings as a leader or sideman. We're very lucky he's coming to Rochester. Back in April 2006, I had an opportunity to see Miller at Joe Segal's Jazz Showcase in Chicago (there's a good profile of Miller in support of that gig on the Jazz Police site) my old stomping grounds, and what a treat it was.  Come out and support this series and keep jazz artists like Miller coming to Rochester.


True to his blues-tinged upbringing, he's a bop intellectual with an unabashed gift for populism. That explains both the thundering jabs in his sparkling runs and the sleekness in his writing and arranging
-Time Out NY 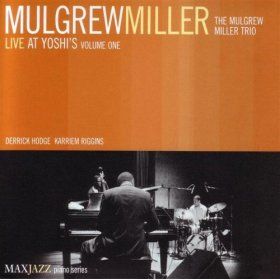 Mulgrew Miller was motivated to play jazz piano after watching a television performance of his idol Oscar Peterson when he was young. He has worked with a number of jazz legends across a broad spectrum, including Art Blakey, Benny Carter, Benny Golson, Wallace Roney, Freddie Hubbard, Kenny Garrett, Joe Lovano, Johnny Griffin and Tony Williams. His style is constantly evolving. Like ETJ, Joe Segal's was an intimate setting. I remembered being in awe as I listened to him at Joe's as I had great seats that afforded me a view of his hands. His style moves easily from swing to a post-bop rhythmic melange, swiftly switching tempos and attacks. I've heard pieces of his most recent releases on MaxJazz, Live at Yoshi's (#1

) and with his Wingspan

quartet. There's some great examples of his playing on his site and some videos (it's flash so couldn't link directly). He'll be back at Exodus to Jazz in December appearing with Johnny O'Neal in a "dueling pianos" faceoff that's bound to be a night to remember.

Miller will be leading a dynamic trio with bassist Ivan Taylor and drummer Ulysses Owens. Both of these cats are top notch. Taylor was with Miller back in April 2006 when I saw him in Chicago, where Ivan hails from and from the early age of 9 has been playing bass. including with the Illinois All-State Jazz Band, the Grammy Band, and jazz masters Orbert Davis and Von Freeman. He was a star performer at the 2002 Essentially Ellington competition where he met Wynton Marsalis, which led him to enroll at Julliard. In addition to touring with Miller, Ivan plays with Soul Cycle, the Julliard Jazz Orchestra, and studies with Ron Carter. Ulysses Owens was here earlier this year as part of the Victor Goines Quartet earlier this year. In addition to performing with Goines and being a regular member of Miller’s Wingspan, Owens has performed with Wynton Marsalis, Kenny Barron, Regina Carter, Benny Golson, Christian McBride, Eric Reed. I believe both of them played with one or more of the artists at recent Rochester International Jazz Festival performances.

There will be two separate sets at 7:00 pm and 9:00 pm at VENU Resto-Lounge & Nightclub, located at 151 St. Paul Street, Rochester. Tickets for each set may be purchased in advance for $ 17.00 through TicketWeb.com (search for “Mulgrew Miller” or “Exodus To Jazz”). Tickets purchased at the Club VENU on the night of the show, if available, are $ 20.00. Student tickets are $ 10.00 with a current ID.

[added 10-31-2007]Check out Anna Reguero's article about Miller in the Democrat & Chronicle (link will self-destruct in seven days...).