About Contact Us Join Our Email List ROC Jazz Artists Musicians & Venue Info
It's the day of the Bird (not Charlie, but turkey) and I'm writing listings? Live jazz in Rochester over the next seven days....
Exodus to Jazz resumes with the Tamir Hendelman Trio on December 1st

Bonerama goes back to high school . . . Pittsford-Sutherland, that is 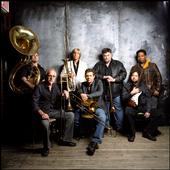 I was contacted recently by Ben, a student at Pittsford-Sutherland High School (which, by the way, has a Business Department with kids learning marketing . . . surprise, surprise), who let me know that Bonerama, a great New Orleans brass funk band fronted by no less than four trombones, will be playing a concert at the school to benefit the Arabi Wrecking Krewe of New Orleans, which is a nonprofit that has organized volunteers, many of whom are musicians or former musicians from the New Orleans area, to provide disaster assistance to victims of the hurricanes Katrina and Rita. Proceeds of the benefit will go to help rebuild homes for musicians in NOLA.

Many of you might have heard Bonerama play one or more of a number of great sets at the 2007 Rochester International Jazz Festival, including one that we really enjoyed at the Montage where the combined firepower of those four frontmen almost knocked us off our chairs. If you missed them at the festival, you should really try to catch them. Check out their cover of the Led Zeppelin tune The Ocean on the band's MySpace page to see (well, hear) what I mean.

Bonerama's coming to town (OK, near town) on December 6th at 7:30 pm (based on the group's website, they're also holding a workshop with the students, which is cool). The concert will be at Pittsford-Sutherland's auditorium (the high school is at 55 Sutherland Street in Pittsford, NY) Adult tickets are $12 and student tickets are $10. They will also be available at the door for $12 per student and $15 per adult.Tickets will be sold through Wegmans stores.  The Sutherland Jazz Band will also be performing.

Come out and hear a band that really has to be heard live to be appreciated and support a great cause at the same time!

The Wegman's ticket site says the show starts at 7:30 PM. That jives with what I have heard from the school...

Thanks, Ted. I assumed the time I was given by Ben at Pittsford-Sutherland was correct, but I've confirmed that everyone else (plus the tickets and Wegman's site) thinks it's at 7:30. I've updated the site and added some more info to boot.