A new voice on Jazz@Rochester tells you about his Friday night . . . .

Today I start bringing in some new voices to Jazz@Rochester—they'll include people I meet at gigs around town, artists, promoters and the people behind jazz venues in town. I'm sure people get tired of me rattling on (and I've had some trouble getting around to rattling for awhile anyway) and I know some would like to see some reviews and such, which are not really my bag, so I'm inviting some new voices to write a post from time to time. One person I see at many jazz gigs around town is Hal Schuler. He describes himself as a longtime jazz fan who remembers seeing, among others: Duke Ellington in East Rochester; Wynton Marsalis at Indigo's; Johnny Griffin at the Calabash; the Cannonball Adderly Quintet at Duffy's Backstage; Sheila Jordan, Claude Bolling and Dizzy Gillespie at Jazzberry's; Michel Petrucciani, Phil Woods, Betty Carter and Sun Ra at Red Creek; and Miles, Monk and  the U of R. Hal wrote the following about his night of jazz last night....

It was a busy day for jazz in Rochester. My first stop was at the Memorial Art Gallery for a 7 pm concert by Jeff Campbell's New York trio followed followed by a rush to hear Helen Sung's quartet in the Exodus To Jazz series, while having to miss the Student Degree Recital by a talented guitarist at Eastman.

The last jazz concert I can recall at the MAG auditorium was quite a while ago when rain caused a Jazzmobile concert by the Horace Silver Quintet to be moved inside. The last time the New York trio was in Rochester was for the 2006 RIJF. I suspect this concert is in preparation for a new CD to follow up their earlier recording, "West End Avenue". The leader is Jeff Campbell bass, with John Wojciechowski on tenor sax and John Hollenbeck drums.

By starting time a nice crowd had assembled and two things were evident. The only electronic device on stage was an amp for the bass and the program let us know there would be ten originals, nine by Campbell. The audience was immediately won over with brief, witty introductions of each song and as the music unfolded we were presented with a very pleasant musical treat. While Campbell is the leader the group functioned as a collective with each member carrying a share of the load. The compositions were varied and, if forced, I would put them in the broadest category of good jazz. There was a lot of interaction among group members often in the form of duets using all available combinations. For me a few specific highlights were the drum-bass duet at the end of "Tone Poem for the Desert," with Campbell using a drum stick percussively on the bass strings and the song sections where the bass and tenor were both playing the melody. The concert ended with the composition "Hoot Gibson" dedicated to the late bassist Dennis Irwin, who used this pseudonym when singing James Brown and Otis Redding songs while in an R&B band. 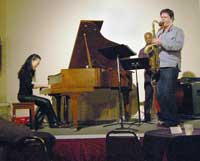 The Exodus To Jazz series for Spring 2008 has moved to the Clarion Riverside Hotel on the NW corner of Main and St. Paul. Heading west on Main. I took the first right after St. Paul and headed for the parking garage entrance at the far end of the building. Parking is free for Exodus attendees. I entered the lobby and familiar faces directed me to the Frontier Room on the second floor. I was a little late but had emailed the Exodus people and reserved a ticket. The new location is larger than Club Venu and has an elevated stage with good sight lines. Like Venu food and beverages are available. Exodus head Jose DaCosta refers to the site as a listening room and constantly circulates making sure the sound is good and loud conversation minimal.

I'd been looking forward to this show ever since I told some friends in Buffalo Helen Sung was going to be in Rochester and their reply was "She's great. We have three of her Cd's." When I got back to Rochester I visited her web sire and listened to some tunes. I also found some videos of Sung with the Lonnie Plaxico group on YouTube.com. Other videos worth seeing are two from Italy, Lucca Jazz Donna—Helen Sung and Jazz alla Fioreria—Helen Sung. In general YouTube is a great source for current and classic jazz videos.

For the Exodus gig the band was Helen Sung piano, Seamus Blake tenor, Richard Goods bass and Ulysses Owen Jr. drums. The set was a mixture of standards and originals. Favorites included Duke Ellington's "Fleurette Africaine" (African Flower) from the Money Jungle album with Ellington, Charles Mingus and Max Roach, a swinging version of Monk's "Bye-Ya" and "Sungbird" the title song from Sung's most recent CD which sold out after the show.

Thanks, Hal. I look forward to yours and other voices in the future.