About Contact Us ROC Jazz Artist Sites Info for Musicians & Venues Buy a T-Shirt!
From some local friends to a visit to the Doctor to a ukelele god . . . all in Day 5 of the Rochester International Jazz Festival
Do you think they stop playing while the RIJF is on? Of course not, so here are the jazz listings for the next 7 days!

A reprise, some wild flowers and Sacred Ground . . . Day 6 of the 2008 Rochester Jazz Festival 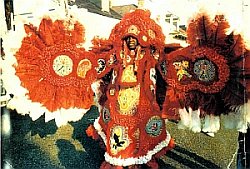 On Wednesday, June 18th, the sixth day of the Rochester Jazz Festival, I anticipate that my energy will begin to wane. If you're looking for more local flavor, check out Saxology, the New Energy Jazz Orchestra, or the Eastman Youth Jazz Orchestra (and of course, the high school bands). The lineup has a lot of choices, but my course is pretty well defined: