About Contact Us Join Our Email List ROC Jazz Artists Info for Musicians & Venues Livestreams
Joe Locke brings it home and stumbling onto something "raw." All in Day 7 of the RIJF.
Jazz@Rochester calling in . . .

Day 8 at the Rochester International Jazz Festival was mostly a free floating experience. Ken and I met up and got a sandwich to eat from Java's, which gave us a respite from street meat for a day (although I don't really believe that the sauerkraut on my Reuben qualifies as a vegetable, which have been in short supply in my stomach all week). We sat at a table outside of Java's, people watched and listened to the great high school bands from Fairport and Spencerport.  Then we took a stroll down East Ave. (with a quick stop at Havana Moe's) toward Alexander to listen to the Skatalites. Although many of the original band from the early 60s are no longer with us, the band really kicked up the ska with a thick layer of horns. It brought back some memories from parties in college in the 1980s when ska was being resurrected by groups like The Specials, The Selecter, The Beat, Madness, and Bad Manners. Before their set was over, we began walking back down East. 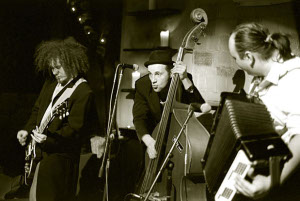 There was only one thing I really felt compelled to go hear and that was Billy's Band at Max at Eastman Place. Thanks to Jane deciding that sitting in the line that began developing soon after the first set for several hours was the way to go, we had great seats up front for the second set.  Billy's Band hails from St. Petersburg Russia.  Leader Vadim (Billy) Novik, simultaneously channeling Tom Waits and Raskolnikov, growled and spit out the biting words of Waits songs like Clap Hands and Blue Valentines and Russian songs (as I don't know Russian or all of Waits' songs, I can't tell you whether they were written by Novik, Waits or someone else. I wish Tanya had been with us to help translate...).  In between the songs, Novik told tales in broken English and continued the Waits schitck with cocks of the head and other mannerisms of the Bard of the Dispossessed. Like others writing about the performance of Billy's Band at Max last night (see below), I'll continue the comparison of guitarist Andrey Ryzhik to Harpo Marx, but in addition to the hair, the comparison is more apt than it seems. Like Harpo, underneath the silence and comic antics, Ryzhik was much smarter than he appeared. He would jump around and goof (I like how he'd see someone outside the window and turned with his bandmate Mikhail Zhydkikh to play for them), but when he needed to be there in the song or to make a change on the effects board or something else connected to the music, he was all business and intense concentration. Anton Matezius played a beautiful accordion, sang and also took a couple turns on hand drum to compliment the minimal percussion for the group (other than Novik's slapping bass), which was a single floor tom and cowbell played occasionally by Zhydkikh, who is also a talented sax player. I expect that Russians have a deep resonance with many of the underlying themes of Waits' music as they appear to be very popular (and have been for awhile) in Russia and in the Russian community in the States. Sure it was schtick, but it was really fun and satisfying schtick. This was one of the highlights of the festival for me and most who attended, who scarfed up their CDs.  Billy's Band has to be experienced live, but if you want to get a taste, check out videos of Clap Hands and Ice Cream Man.

After that we didn't need more festival and it was such a beautiful night, so we headed over to Abilene, the new bar near the Harro East for a nightcap. As the Park Avenue Band wrapped up their last set, we moved out to Abilene's great back yard patio and had our own after-hours, listening to reggae, and talking about the RIJF and the music scene in Rochester with Tom Kohn of the Bop Shop.  A good night.

Other voices out there in the 8th RIJF night: