About Contact Us ROC Jazz Artist Sites Info for Musicians & Venues JazzRochester Merch
Want some more? Check out the after hours at the RIJF
Rochester International Jazz Festival . . . Some other voices

Discoveries and journeys . . . Day 2 of the Rochester Jazz Festival

Rolling in Saturday morning around 4:00 am after going to the after-after-hours at the Flat Iron Cafe, by the time I woke up I had a limited amount of time to catch up my posting to where I was and get out of "preview" mode and into writing about what's going on now.  I just had to get that last post out about after hours clubs and events, and so ended up down to Jazz Street a bit later than I wanted. Waiting in line for Robin McKelle at the Montage, I realized I just wasn't likely to get in and, if I did, would not really enjoy the performance, so I left and went in search of "something else." 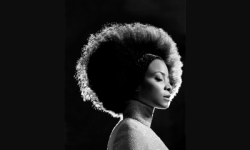 One of the wonderful things about the Rochester Jazz Festival is that you sometimes discover something just by accident. I found Stephanie McKay and what a sweet "accident" it was. I have a sweet spot in my innards for soul, funk and R&B and she just served it up with a powerhouse trio of musicians behind her laying it down ("Yo, Manny ...drop that beat!). McKay just tore it up and had all our butts moving with a powerful set. Her songs were personal, political, powerful and...funky. I discover as many talented artists in other areas than jazz at the RIJF. I wish my wife Dianna had been there to see the show as she is responsible for rekindling the fire I have for this music. After losing her mother a few years ago, she would have been moved by McKay's sharing from the stage that her mother had died a mere week ago and then launching into a beautiful song in dedication to her dedicated mother. Bought McKay's CD on the way out and look forward to hearing her new CD when it is released in July. To see what I mean, here's an "official" video and one that is more stripped down and personal. You can listen to more of Stephanie McKay on her MySpace page.

Meeting up with Dianna, we headed into Eastman Theatre to see Dee Dee Bridgewater's A Malian Journey and the opener Richard Bona Band. As the time for the performance neared, it was disappointing to see how empty that large hall was despite it being Saturday. Richard Bona and his band played a fun and diverse set of music that ranged across continents and genres. The dynamics of Bona's music and singing were at times astounding, such as with his opening number that started with ethereal flute like sounds coming out of his 5-string bass and, with the break, went into a more Afrobeat groove.  I like the way an article in AllAboutJazz.com described his style:

Bona got the audience involved with the Afro-Cuban sounds of O Sen Sen Sen. Bona and his band seemed to be having fun up there and played much longer than you'd expect an opener (I kissed any chance of catching the Bad Plus before he was done). 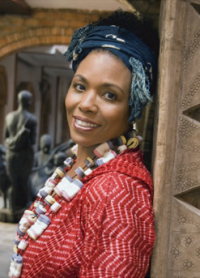 Coming on stage with her band in a shocking pink wig (which several audience members sitting close to the front also had on their heads), Dee Dee Bridgewater pulled the wig off to reveal her gloriously bald head and paid a compliment to Bona by saying she needed to do something dramatic to follow his set. Bridgewater and her band then launched into a powerful personal journey that she took to discover her roots in Mali and the music and inspiration she found along that trek.  She started that journey at its end, her jazz roots, with Mongo Santamaria's Afro Blue. Her band was from all over the world and included an amazing pianist Edsel Gomez, bass and musical director Ira Coleman, multi-percussionist Minino Gara, a wonderful and three Malian musicians (sorry but I don't have all of their their names, other than Cherif Soumano, who was fantastic on the multi-stringed kora—I don't want to just assume they are the same as on her album Red Earth: A Malian Journey). She was also joined two absolutely stunning Malian vocalists—Mamani Kéita and Kabiné Kouyaté, who is griot. Bridgewater's duets with these two singers were especially powerful and had Dianna in tears and shouting out approval. Kouyaté's singing hit you somewhere deep inside as it clearly did Bridgewater. It was clear that this was a deeply personal journey that Dee Dee Bridgewater was presenting and her expressive face, joyous dancing, and powerful voice told that story and well.  I just wish more people had come (and stayed through to the end) to hear it.