About Contact Us Join Our Email List ROC Jazz Artists Info for Musicians & Venues Livestreams
All things must end . . . Day 9 of the Rochester Jazz Festival
Want some more? Check out the after hours at the RIJF

Day One of the Rochester International Jazz Festival went according to plan . . . well almost.  When I got downtown about 4:30, it was hot and humid and there seemed to be more people than I remember from previous years. The high school jazz band from School of the Arts was playing and lines were already forming for Kilbourn and Max at Eastman. However, in the venues themselves, things seemed somewhat lighter than I expected (with exceptions).

I ran into friends and many of the the people I see every year at the jazz festival (and only at the jazz festival) and finally hooked up with Ken, Seth and his wife Christine, and Jane. According to plan, we took the step (I think unprecedented since we first met up in 2006) of not hitting the Kilbourn Hall concert first. Instead, we headed over to Harro East and caught Ben Riley's Monk Legacy Septet.  Riley was Thelonious Monk's drummer on such classics as Straight No Chaser and Monk's Blues. Although the crowd was lighter than I expected, he and his band played a set of Monk that simultaneously payed homage to the off-beat master while also putting a personal spin on Monk's music, especially in that the Septet has no piano, with the other instruments taking Monk's piano lines.  For me, Bemsha Swing, Bright Mississippi (on which the bass solo was killer) and Rhythm-A-Ning were standouts. 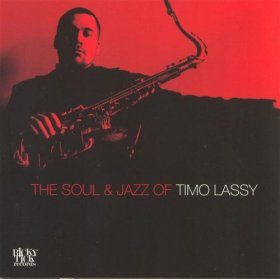 We ducked into the Mondavi tent and caught a few minutes of the blues with Newfoundlanders Denis Parker and Scott Goudie.  As the rain clouds grew and the drops started to fall, we ducked back out and headed over to the Reformation Lutheran Church for the Timo Lassy Band, part of the Nordic Jazz Now series. It will be hard to top the smokin' set that the Finnish saxophonist and his bandmates laid down. Lassy doesn't wow with speed on the tenor and baritone sax, but by playing with emotion. From start to finish they were burning with a soul groove that reminded me at times of Horace Silver (there was a piano vamp in the second tune Early Move that made the connection for me).  Another highlight was the Sweet Spot at the end of the set, including some incredible piano by Georgios Kontrafouris. The drum solos were unique as Timo's band has two percussionists and there was some great interplay between them. Ten minutes before they finished I wrote the note "standing O" in my notebook and closed it up as I knew, of course, I would be right (it wasn't a great leap by the crowd's reactions during the set). When we walked in the church was hot.  It was hotter inside when we left.... That could have been the end for me and I would have been satisfied.

However, on the outside the rain had come and it was cooling down. With increasingly larger drops falling and some danger of lightning striking near by we headed over to the tent to hear DJ Le Spam and the Spam Allstars.  It wasn't long after they started that there was a large group of people dancing to the right of the stage and having a great time.  I spied José DaCosta from Exodus to Jazz and his wife leading the group in some rhumba and other moves. Although I'm sure it wasn't a pretty sight, I went over and joined them for a few minutes and said hello to Jose, who will be announcing his fall ETJ series lineup soon. The group's sound was a great melánge of jazz, hip-hop, Cuban and the other influences found in South Florida.

With more rain coming down we walked quickly toward our final destination. Here is where I diverged (OK Goudie and Parker were too) from the plan posted earlier.  I decided that I'd seen one jazz cat from the past and it was time for something new.  I had seen Rachel Z with her band "The Department of Good and Evil" at the Strath in August last year. She announced that she would be doing some "deep jazz" interpretations of rock-and-roll songs and then proceeded to do just that.  Her set at the Montage ranged from Neil Young's Heart of Gold, Depeche Mode, Alice in Chains, the Yeah-Yeah-Yeahs' Maps, to Bill Withers' Any Time She Goes Away, ending with Wayne Shorter's ESP.

I wasn't ready to stop there, so I parted ways with Ken, Seth and Jane, and went on my merry way to some more jazz (but more on that later).

Here's some other takes on the first day from Ken, Seth, Jane:

Hope you all had a great opening night.  If you know of any more who are writing about the festival, please add them in the comments!  Let us know your thoughts in the comments, too.  Just click on the Comments link at the bottom of the post and follow the instructions.

Couldn't get into Robin McKelle's late show so I went over to the tent. The band was good but there were very few people there and the volume was cranked up like they were trying to drown out the conversations of a thousand people. Don't the folks that run that sire have any common sense or am I just old and cranky.