About Contact Us Join Our Email List ROC Jazz Artists Info for Musicians & Venues Livestreams
And away we go! My RIJF coverage begins with a look elsewhere....
What's in store for Jazz@Rochester on Day 2 of the RIJF? What else?

Day One . . . Some things change, some don't . . . Jazz@Rochester's plans for opening day of the RIJF

The opening night of the Rochester International Jazz Festival blows into town next Friday offering a good taste of the programming in store for the nine days to follow. There's the big name draw at the Eastman Theatre, Frank Sinatra, Jr.; returning artists like Al Foster, Timo Lassy (we saw him last year with the Five Corners Quintet) in the now institutional Nordic Jazz Now series, and Rachel Z; and some new names (at least new to us) in jazz and other "affiliated" genres of music, like Ben Riley's MONK Legacy Septet, Amina Figarova Sextet, the Blue Vipers of Brooklyn, the Spam All Stars, Denis Parker & Scott Goudie "Rowdy Blues," and the Downchild Blues Band. Thrown in with this is a wider selection of local artists, this night including Gap Mangione, who will open for Sinatra, the Dave Rivello Ensemble, and the Rochester area high school bands who kick the evening off every night. 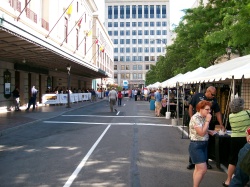 So how do I plan for the RIJF? Over the next several days, I'll share my "planning" in this blog. The goal for me is to hear as much music as I can during those nine days and, if possible, hear something new and challenging, catch those who are returning who I really enjoyed in past years, and also catch those artists or sets that I know I just can't miss. The people at the RIJF have promised me a media pass again, which will allow me to attend some of the shows in the Eastman without breaking the bank, but I'll be focusing on the Club Pass venues as I usually do. 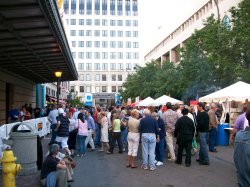 Planning an evening at the RIJF can be quite a dance, which always starts with choices for the 6:00 and 10:00 pm slots and then gets filled in with in-between stuff. There will be changes as one of the great things about this festival is it's immediateness--all of the venues are near each other and there is a sort of "crossroads" on Jazz Street (Gibbs during the rest of the year) and in line where people often end up talking. You'll be heading to your next "scheduled" stop and you'll hear from your friends or one of the many people who you only see during the RIJF that "so and so" they just saw in "club X" was fantastic and can't be missed, which may lead you to a change in direction. So what's my plan? If you care, here goes. My Friday is shaping up a bit odd (at least in comparison to my usual approach):

That is what I love about this festival.  I'm getting a whole lot of a whole lot of music here, all within the span of a few hours and a few blocks.  So, what do you think? Who are you going to go out and hear? Let us know in the comments....

I just went to the Spam MySpace; I like it!! Maybe I'll try it. I don't have a pass this year, so I'll be picking and choosing.

I know one Big Tent thing I want to see for sure, and that is Bill Tiberio's at 6:00pm on Tuesday the 17th. There will be surprises this year. You shouldn't miss it.
Tracy

WHITNEY MARCHELLE IS SINGING WITH THE MUSIC EDUCATORS JAZZ ESSEMBLE(BIB BAND) ON JUNE 18TH AT 9:15 pm on Gibbs street.
She will be performing one of Wynton Marsalis's tune, LOOSE DUCK (on her new cd) arranged by Wycilffe Gordon as well as a Ellington arrangement and a Dave Berger arrangement.
Whitney says Conductor Howard Potter has a way of bringing the best of the Big Band of Rochesters Music Instructors.