Joe Locke brings it home and stumbling onto something "raw." All in Day 7 of the RIJF. 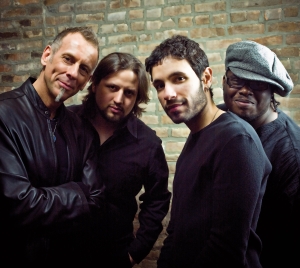 Joined by our friend Tatanya, I stood in the line that formed early at Kilbourn Hall to hear Joe Locke & Force of Four play.  I've heard Joe Locke play here a number of times in my short time in his hometown, but knew that this night would be special.  In all the times he's played here, he had never played in Kilbourn. This was the first time and it was clear that it meant a lot to him. Being able to listen to Locke's vibes and his new band Force of Four in the acoustically fine hall meant a lot to us. Working a his tight new young band with Robert Rodriguez on piano,  Ricardo Rodriguez on bass, and Johnathan Blake on drums seems to have been a wonderful learning experience for Locke and it showed as they played a number of originals from their new album Force of Four, which will be released on Origin Records in September, but was made available to his hometown festival goers early. As he was with friends, Joe talked and caught us up on his life. A telling comment Locke made reveals a lot about him and why he tries so many new projects, which this year has included working with Trio Da Paz, Columbian harpist Edmar Casteneda, and having his music arranged and played by a symphony orchestra with him as soloist —the guy is always about trying to learn and expand his musical vocabulary. He explained that is has been a heady year, with these projects as well as an appointment to the faculty of the UK Royal Academy of Music and winning 2008 "Mallet Player of the Year" Award from the Jazz Journalist Association (which I don't think he mentioned as he won it yesterday). But Joe didn't talk the whole set, he let his vibes do most of the talking in a set that ranged from joyous to haunting and left the notes from his four mallets ringing through the hall. When the final note of the "story" piece "Available in Blue," I overheard a woman behind me exclaim "God ... that was so beautiful." I'm looking forward to hearing this album and other projects as Joe Locke continues his education in jazz and music.

We headed over to the church to try out Beady Belle, the Norwegian group. Whoever wrote the entry for the band in Wikipedia describes their style as "jazz and acid-jazz inspired using upbeat and downbeat electronica roots, use of vocal harmonies, piano and strings." They are that and a lot more. They played a number of originals that had a lot of layers to back up the rich and beautiful voice of the lead singer Beate S. Lech. This was the band's first gig in its first tour of the United States. The full-house audience just ate them. The RIJF'ers that come to the Nordic Jazz Now series at the Reformation church tend to have open minds and are there to hear good music played by good musicians and, often, to open their ears to those who play it from across the pond from the colder climates. We've not seen a real musical dog in two years of these and we've not seen one that is the same as the other—showing the rich diversity of talent coming out of Norway, Finland , Sweden and Denmark. Beady Belle's music was rocking, soulful, interesting and played by a group of very talented musicians.  All of the songs were in English (although Lech went into a kind of Norwegian accent parody during one interlude). Here they are being a bit more jazzy and scatting in Germany.

Our upstairs neighbor Kristine had joined us after meeting her at Beady Belle. We intended to go hear Tierney Sutton in Max. However, I forgot that sometimes Max lets people in for the second set early to get them fed and liquored up before the show, so instead of the line snaking down Gibbs it is just let in and the line that forms are those who are waiting in case someone leaves (one in, one out). By the time we realized what was going on, it was too late. So Kristine and I took a chance and went over to Montage to catch Blake Tartare ("raw," get it?).  Blake Tartare is no Tierney Sutton (but saxophonist leader Michael Blake wouldn't want to be would he?), but it was one hell of a ride and another great stumble into music that I really loved hearing. By the crowd (quite a few of whom I knew), it was clear to me that this would be music more on the fringe. Blake Tartare is the latest project of saxophonist/composer Michael Blake, who fronts a quartet of young Danish improvisers: Soren Kjaergaard on Fender Rhodes and piano, Jonas Westergaard on bass, and Kresten Osgood on drums.  Their music ranged across the spectrums and highlighted each of them. The drummer Osgood was intense, looking like he just walked out of a frat house (with beer), but applying himself to his skins like his life depended on it. In their encore they engaged the house in whistling (in harmony) the melody from a pop tune that I'm too old to place working it to a crescendo of whistles, floor tom pounding and beer bottle tooting. It was a great show and had Tom Kohn from the Bop Shop ready to tie a toe tag on his festival as he was fully sated. I'm sure he has their CD and I may have to go get a copy.  For a taste of Blake Tartare, here they are in playing a outdoor pizzeria in Venice.

What are the rest of them saying? Here some other voices on Day 7:

While anticipating Beady Belle at the Lutheran Church on Thursday June 19 I happened to catch the music of a regionally-known guitarist and his band-the Craig Snyder Fusion Group. This was one hot band! The guitar work was absolutely top notch with every known technique employed from tapping and legato style to beautiful lush chords deliverd to my ears with a twin stereo amp set up.The bassist was a Rochester guy who played some serious bass lines and solos. The drumming and keyboard work were equally great making this band a real joy to experience. The tunes were original with Craig even singing a bluesy number that was sweet.
This band was as good as any at the Rochester Jazz Festival and it is too bad that the crwod was small. This guy Craig should get a shot at a venue at a time when more folks have a chance to catch his music. Absolutely great.
HH

The Craig Snyder group on June 19 at the Lutheran Church was wonderful. The tunes were a combo of jazz/rock and even though the crowd wasn't that large, the music was great. Craig's guitar playing is second to none and his band was good as well.

It's a shame attendees don't check out more of the local cats playin' this festival. The whole time I was watchin Craig Snyder and his group tearin' it up, I kept wanting to run through the streets and drag people into the church to see what they were missing. Good grief!! I have driven several hours to see fusion players that end up making me yawn half the night. Not this time!! What a great player!! What a great group!! Only thing missin' was John Belushi doing some back flips down the isle .

I DID GET TO SEE CRAIG SNYDERS GROUP AND THEY WERE REALLY GREAT.VERY PROFESSIONAL ACT.I HOPE THAT I WILL GET TO SEE THEM NEXT YEAR. DANNY

A highlite of the Fest was the Craig Snyder Fusion Band at the Lutheran Church June 19th. The band is a cohesive unit led by a guitarist with nothing short of amazing skills that are second to none. The original songs transcend the obvious technical proficiency and go straight to the soul. Stunning performance from a Rochester area band.

AS A ELVIS TRIBUTE ARTIST LOCALLY AND ALSO A SUPPORTING SOLO ARTIST& WITH A LOCAL ACT CALLED 2 STEPS BACK!
I HAVE ENJOYED THE FINE MUSICIANSHIP AND SUPERIOR EXCELLENCE
OF CRAIG SNYDER
CRAIG STANDS OUT ABOVE AND BEYOND
WHAT JAZZ MEANS, NOT TO MENTION THE WORD FUSION...EXPLODING! HIS
DEDICATION TO HIS CRAFT IS NOTHING LESS THEN
AWESOME!.CHECK OUT HIS GREAT CD EARTHBOUND
AND CATCH HIM LIVE...HIS TALENT IS
MEZMORIZING TO SAY THE LEAST..
A TRUE ARTIST!

Another outstanding performance by The Craig Snyder Fusion Group with a solid groove highlighted by the bursts of guitar fret fury. No one in Rochester, or anywhere else for that matter, does it better

The Craig Snyder Fusion Group reighned dominant on June 19 at the Rochester Jazz fest. If the fest was a contest then the competition would have been slaughtered. Craigs playing was as fantastic as usual. I thought that I should have been sitting in an audience of thousands watching the band play at Madison Square garden.

I am a huge fan of 4 Walls of Freedom. From Joe Locke w/ Robert Rodriguez, Johnathan Blake , Ricardo Rodriguez's new album Force of Four, what was his set list?