About Contact Us ROC Jazz Artist Sites Info for Musicians & Venues JazzRochester Merch
I wish I'd thought of that earlier....
What's up Doc? Day 5 at the RIJF...

No confusion over fusion . . . Day 4 for Jazz@Rochester

As the clouds started to rise up for the afternoon thunderstorm, I started the day out early at the 5:30 set of the Cindy Blackman Quartet. Blackman had received some advance press and there is always her connection to rocker Lenny Kravitz to raise the buzz a bit, but her early set at Harro East was not packed and I think that was a result of this buzz as well. More than one person said they didn't check her out because they thought the gig was going to be along the lines of jazz-rock fusion. Although Blackman and the members of her quartet—J.D. Allen on tenor sax, Carlton Holmes on Piano & Fender Rhodes, and George Mitchell on bass—played a set that ranged through a number of styles, their playing was firmly grounded in the jazz idiom and showed this group of youngsters have some great chops on their instruments.  Blackman's skills on the drums lived up to both the buzz and the video and recordings I had heard beforehand—she's a monster on the trap set (although her drums were giving her a bit of trouble during the first set, but kept the beat going for the most part with one hand while fixing her set with the other). Sometimes a piece just sounded like one long drum solo--but in a good way. The booms of thunder coming from outside were lost in those coming out of those sticks and skins.  Blackman was third strong African-American woman leading in this year's RIJF. As I'm married to a strong black woman, I like seeing more of that.

Came into Christ Church for the first time to catch Miguel Zenón, who had already started playing by the time I made it across from Harro East.  When I said in my preview post that the church would be an  "acoustically interesting" space, I must confess that I had actually heard music in Christ Church. It's a big, cavernous space and the sound they had set up was just not up to it.  While I loved what I heard, the sound was muddy and Zenón's blowing was lost in the mix at times.  Anyway, I had to cut out early to head over to David Liebman's second set. 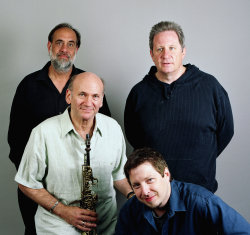 I got a great seat to see the Dave Liebman Quartet. Didn't know what to expect from this cat who has been around a long time, but whom I had somehow managed to miss in my aural meanderings through jazz. The Montage was packed, a few of whom were there for a second round, and the SRO crowd was very appreciative of Lieb's dynamic and challenging music.  His quartet—Tony Marino on bass, Marko Marcinko on drums, and Vic Juris on guitar—worked the interplay with Liebman's soprano and tenor saxophone. Marcinko stood out as he used all manner of noisemakers and all parts of his trap set in inventive ways. Although Liebman's writing and playing is sometimes on the freer side of jazz, this powerful and driving set was accessible and one of my standout performances so far this RIJF. One standout was a tune was Dimi and the Blue Men, which was inspired by hearing a popular West African singer's voice Lieb heard everywhere during a 60th birthday trip to Mauritania.  At the end, festival producer John Nugent came in with his sax and sat in with the quartet. Nugent was Lieb's student in Canada for a time.  This was the first time I had heard Nugent play outside of the after hours straightahead vein. That cat can blow....

One rant, though.  Montage needs to figure out some way to deal with the noise from those who are outside of the music room in the bar area during performances. Especially with challenging and dynamic music such as that of Liebman's group, the cascade of voices coming from the other side of the curtain made it hard to concentrate on the music for those sitting toward that end of the room (and there were quite a few of us there). There is no door so that isn't an option (and it would make it more difficult for the wait staff to get in and out, which is difficult enough with the crowds). RIJF house staff don't have to shut people down entirely, but they should take into account the type of performance and music and then try to keep it to a lower hum.

I walked back over to Swan Street to get in line for Lou Donaldson at 10:00 pm in Kilbourn Hall. Surprisingly enough, this was my first time in Kilbourn during the 2008 RIJF.  The line was already to Swan by the time I got there, but Seth and Jane were a bit ahead of me and saved me a seat.  Donaldson is 81 years old, but still a "player" in more than one sense of the word.  As is common with these cats who came up with all the greats (James Moody was another), Donaldson was full of stories and jokes.  He also has a few opinions on the place that straightahead and bebop have in the jazz firmament ("We play bebop ... very fast, very tricky ... not recommended for fusion and confusion musicians.").  At 81, Donaldson can blow and he's still fast and tricky. He mentioned coming to play Rochester often during the heyday of the Pythodd and other jazz clubs in town. Donaldson's quartet included two Japanese musicians—B-3 player Akiko Tsuruga, who Donaldson noted "of course by her name you can tell she's from Alabama" and drummer Fukushi Tanaka (he, of course, was from "Mississippi"). They were both monsters on their instruments—with Tanaka tearing it up in a 5-minute solo and Tsuruga making the organ sing as only a B3 can do. On guitar was Eric Johnson, who walked though the hall during one solo on wireless, and played a great foil to Donaldson's still speedy runs on tenor sax.

While I hesitated when asked "are you going over to the hotel?," the fatigue of the last few days got the better of me and I drove home to get some shut eye, so I can do the day job as well.

Some other voices can be found in the following places: