Sometimes I forget my age, how much "fun" I've already had and how much I'll pay for it later (why do you think I'm doing this on Monday...?), and because sometimes I just feel like I don't want a particular evening to come to an end. Well, it does ... it becomes morning. I met up with Ken and Seth at the Strath to discuss strategy for blogging and podcasting during the upcoming jazz festival Saturday night and listen to John Eckert with the Bob Sneider Quartet, which that night was missing Bob for part of the evening as he was playing guitar with the RPO and Byron Stripling, Wycliffe Gordon, Peter Appleyard, and Chris Vadala over at the Eastman Theatre for the 85 Years of Jazz program, RPO's last concert of the season, which Dianna and I had the pleasure of seeing Friday night. After the RPO gig was over, Bob and the whole bunch showed up at the Strathallan (which didn't surprise me as I expected they were staying there). Wycliffe took out his horn and blew some beautiful ballads with the band. My friend Jimmie Highsmith Jr. was there as well. A second set, a scotch and a beer later, as people were all packing up. I found out Wycliffe and Jimmie were heading over to the Flat Iron Café to play with Quinn Lawrence and his trio (Kate Gentile on drums and Ben Thomas on bass), at their regular after-hours gig on Sunday morning at the Flat Iron. I decided that it had been awhile since I saw Tom LaBue, Flat Iron's owner and I had a cigar burning a hole in my pocket, so I went over. Good choice . . . . 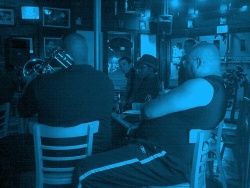 After awhile, Wycliffe and Jimmie showed up and unzipped their gig bags.  They sat at tables facing the trio, or got up and joined them and faced us. They were just jamming. They weren't playing for a crowd—there was just me, Tom, a couple that Tom knows who enjoy hanging there, and a guy who spent most of the time sleeping on the table (that's him in the one picture . . . he's not ducking to avoid Wycliffe's slide). There's nothing like listening to great musicians jam early in the morning, just sitting around and playing for the sheer joy of it. The music flowed for several hours.

This type of thing happens with some regularity at the Flat Iron. I'm afraid jazz doesn't happen like this anywhere else (if I'm wrong, let me know), except for an earlier version of "after hours" during the festival (the Flat Iron has the real after hours all week during the RIJF). But there is one thing missing...you. Tom is fighting the odds to keep jazz music flowing at the Flat Iron. He's a true urban pioneer and has created a great oasis of music, dance, and libation at the corners of Corner of Lake, Lyell, Smith, and State Streets. Take a chance and check out something out there or any of our struggling jazz haunts. You don't have to do the 3:00 am thing, but you'll miss a unique experience of some great music if you don't.

we were over at the strath Wycliffe asked me about Quinn being at the Flat iron I told him I was just there they hadn't started yet. Wycliffe said are you going over I said yea he said I will meet you there. I went over after hangin out at the strath we hung out and i sang one little blues tune we had alot of fun and then i left. Everyone sounded great.

Maybe if the Flat Iron paid musicians better, more would venture out to get a gig. We could have the local greats playing again and not just wishing we had a "scene."

But, since the Eastman rules this area, and the few people that aren't Eastman students or faculty play for pennies... we ares stuck with the same old same old.

Jazz is dead in Rochester. No one wants to come out because most people don't want to drive to the ghetto for something like that.

A little advice: bring jazz to the suburbs. Cut the cord with the Eastman. Stop promoting academic jazz and get real with the real thing.

And that ain't Bob Sneider or the RPO!