About Contact Us ROC Jazz Artist Sites Info for Musicians & Venues Buy a T-Shirt!
Baby needs a new pair of headphones . . . Support jazz radio in Rochester by pledging to Jazz 90.1
Xerox and RIJF sitting in a tree... Rochester International Jazz Festival gets a new name! 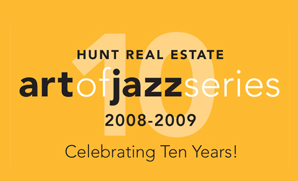 Yes, Virginia, there is jazz elsewhere in Western New York (actually, quite a lot, but I only have so much time to keep up). While I can't get it all in, I like to try to let you know about some of the more exceptional stuff when I can. One such series of jazz concerts the Art of Jazz series, now starting its 10th season at Buffalo's Albright-Knox Art Gallery. This year's lineup is, as usual, full of new stars, recent folks who you may have heard at the RIJF, and a few old favorites.  Between now and May 2, 2009, the following artists/groups will be appearing:

Tickets went on sale August 15, 2008. For tickets, visit their website or call 716.270.8292. They say that concerts usually sell out well in advance, so if you want to go order early. I may just get over to Buffalo yet (yes, I have to admit that I've been in Rochester since 2002 and have never been there, other than to the airport once and to pass by on the way to Niagara Falls for one of the many trips to show visiting relatives and friends).  Could see some great art, too....