About Contact Us ROC Jazz Artist Sites Info for Musicians & Venues Buy a T-Shirt!
Holidazed? Some jazz over the next seven days is just the ticket ....
Get 'em while they're "cheap"! Rochester International Jazz Fest ticket price going up on January 1st

Wanted to makes sure you all knew (there's been some ads, etc., but it can't help to repeat) that world-renowned composer,band leader and multiple Grammy Award winner Maria Schneider will be bringing her 18-piece jazz orchestra to the Eastman Theater on Friday January 23, 2009 at 8:00 pm. 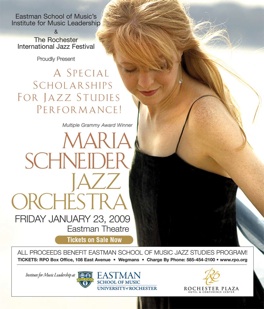 John Nugent & Marc Iacona are teaming up with the Eastman School of Music's Ray Ricker and the Institute for Music Leadership at ESM to present Maria Schneider in a grand “homecoming” to Eastman. The acclaimed jazz composer graduated from Eastman in the mid 1980’s. RIJF has created the RIJF-ESM jazz scholarship program seven years ago with the intention to help deserving student’s education costs. Ricker notes that on January 22-24, 2009 ESM is

...bringing together music school leaders from around the country to take part in a workshop entitled, Preparing the Generation-E Musician: The Place of Entrepreneurship in Higher Education Music School Curriculum. Who wants to talk about entrepreneurship all day! We need music, and what a perfect fit for us to present Maria. She epitomizes today’s entrepreneurial musician. You can’t argue with two Grammy-winning recordings achieved with internet only sales!


Ricker's last comment is from Schneider's innovative creative process in which she has eschewed the major labels and raised funds for composing and producing CDs from her fans through ArtistShare and then sold the resulting acclaimed CDs on the Internet only. Schneider was one of the first artists to use ArtistShare. Her most recent album, Sky Blue, also done through ArtistShare won Jazz album of the year in this year's Downbeat Critics poll. The Maria Schneider Orchestra also received Best Big Band and Maria was named Composer of the year and Arranger of the year in that poll. A piece on that album Cerulean Skies was awarded a Best Instrumental Composition Grammy in 2008.

Tickets are $40, $30 and $20 (plus service charges) and are on sale at the RPO Box Office at East Ave & Gibbs St. (next door to the ECMS), online at RPO.org, at all area Wegmans Stores and through Charge by Phone at 585-454-2100. All University of Rochester students get a 15% ticket discounts; just show your ID. In addition, since the Rochester International Jazz Festival is also behind this performance,its e-news emails have also included a sweetener. If you've purchased an RIJF 2009 Club Pass Series ticket, just take your ticket or a copy of the email we sent you showing proof of purchase to the RPO Box Office on East Ave. and you'll get 15% off tickets in any section for Maria's show (limit 1 per Club Pass).

Check out Anna Reguero's article in the D&C, Eastman School of Music grad Maria Schneider jazzes up her musicianship with a keen business sense.

Posted on December 27, 2008 at 08:00 AM in Jazz Around Town, Other Events, Rochester International Jazz Festival | Permalink | Comments (0)