About Contact Us Join Our Email List ROC Jazz Artists Info for Musicians & Venues Livestreams
Take Five jazz links and call me in the morning . . . oops it is already
Latin Heat series at Exodus to Jazz continues with Gabriel Alegria Afro-Peruvian Sextet 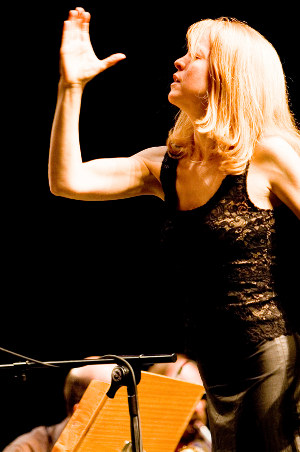 As you can see from my live shot from Friday night, I had the opportunity to catch the Maria Schneider Jazz Orchestra at Eastman Theater. As I have had little exposure to Schneider's music, the concert was an introduction for me to the lush and intricate soundscapes that she and her all-star jazz orchestra create. All the better that it was live and in the expansive space of the Eastman Theater (although at times that space also detracted from it).  My jazz listening has for the most part focused on smaller groups, trios, quartets, rarely going much over the sextet range except for the great local high school bands and occasional larger ensembles at the Rochester International Jazz Festival and the Chicago Jazz Festival when I lived there.  Schneider's group of 18 musicians, many of whom she's been working since the early 1990s, took solos that repeatedly sent chills down my spine, but when they came together as a group they seemed like one organism and again with the spine.  Music that does that to me does not come around often.

What I didn't mention in my brief note was that the next day I was also going to catch Ms. Schneider in a much different context. Schneider, a graduate of the Eastman School of Music, came "home" to Rochester help the Institute for Music Leadership (IML) at the Eastman School of Music—which was formed in 2001 to help the music school's students, alumni, and professional musicians with providing education and tools to become leaders in the music industry and shape the musical and cultural future—by serving as a centerpiece to its 3-day workshop "Preparing the Generation E Musician: The Place of Entrepreneurship in Higher Education Music School Curriculum."  The workshop, which finished up yesterday, brought the leaders of nearly 50 higher education music schools together to brainstorm incorporating entrepreneurship into their curriculum and help their students become involved in creating that future and a rewarding career in what they love.  Schneider's concert on Friday, which was co-sponsored by the Rochester International Jazz Festival, was a part of that workshop.  As using the Internet and other new media tools to build the future of music promotion and culture is one area in which I'm intensely interested (this blog being one facet of that interest), after inquiring I was also given an opportunity to attend the Saturday session of the workshop by Ramon Ricker, Eastman's Senior Associate Dean for Professional Studies, Professor of Saxophone and Director of the Institute for Music Leadership. Schneider was the keynote that morning to tell her story and field questions from the attendees.

Schneider is like a poster child for the type of musician that the IML is trying to build and support. She has built a richly rewarding career, both in critical acclaim and in more worldly ways, through forging a different path and utilizing the Internet.  After arriving in New York City in 1985 after graduating from Eastman, she worked as a music copyist and studied with Bob Brookmeyer and through luck and her talent became an assistant to her compositional idol Gil Evans.  In those times she did a lot of writing for others, trying to write in their voice. This lead her to start the Maria Schneider Jazz Orchestra in 1993 to find her own. The group did five years of weekly gigs at a place called Visiones in Greenwich Village, gigs at which she often made less than the cab fare it took to get her there and back and for which her band members were paid just a bit more than she was.  But it was her music and, little did she realize at the time, she was building an audience that would help her launch her career in a different direction later. She received Grammy Award nominations in each of her first three albums, Evanescence, Coming About, and Allegresse. After realizing how the record company (and the industry as a whole) keep artists in a more or less share-cropping situation (my thought, not her words...), Schneider went a different direction after being approached by her friend Brian Camelio about an idea he had, which became the ArtistShare site. The one thing about an music recording that cannot be fileshared (and this was the big thing in the recording industry at the time of ArtistShare's creation) is the creative process itself.  ArtistShare takes an innovative approach using the Internet that allows an artist's fans to show appreciation by funding their recording projects in exchange for access to that process. As you increase your participation in the project (i.e., by paying more) you have more access to the artist, from just prepaying for the CD or download to being an "Executive Producer" on some projects, which gets you into the recording session itself, credit on the liner notes, face time with the artist, and other perks. It's sort of crowdsourcing the funding and production of a recording or other project through the fans of the artist. The resulting recording project is sold only through ArtistShare on the Internet. This is where the fan base that Maria had built in the five years of low-paying gigs at Visiones paid off.  In 2005, Schneider released her first album through ArtistShare Concert in the Garden, which one the 2005 Grammy for Best Large Ensemble Album and became the first Grammy award winner with Internet-only sales.  That album also wone the Jazz Album of the Year by the Jazz Journalists Association and the Downbeat Critics Poll.  Her most recent ArtistShare project, Sky Blue, was released in 2007 and nominated for two Grammy's, winning one for Best Instrumental Composition for the piece Cerulean Skies (which she ended her concert here with).

In telling her story and in interplay with the audience at the workshop, Maria Schneider showed how passionate she is about her music and about how students entering the "real world" can follow their passion and not starve.  Given her life story and success, I thought a lot of what Schneider was worth capturing and sharing with my readers, many of whom are musicians or interested in the music scene as more than just casual listeners. I took a few random notes as she spoke and thought I'd set them out below (these paraphrase what she said; they are not quotes as I'm a notoriously slow note taker):

Schneider talked about a lot of this with WXXI's Bob Smith a few months ago on his 1370 Connection, currently available through the IML's site.

Following her presentation, I stuck around while a number of groups of students and faculty, who had been brainstorming during the previous day presented a series of "rocket pitches" to the audience and a panel of judges describing different ways to bring entrepreneurship to their schools. While they were still not completely ready for prime time, each of the proposed ideas had one or more kernels that could be viable in bringing an entrepreneurial spirit into the music schools and students, and some even to make a few dollars.

By the way Maria, I think the person you mentioned but couldn't remember the name of when talking about musicians building their own "tribes" to support their art may be Seth Godin....