About Contact Us ROC Jazz Artist Sites Info for Musicians & Venues JazzRochester Merch
It's Friday, so let's Take Five . . . more jazz links for you
Bop Arts Jazz in the Atrium Series begins on Sunday with the Ethnic Heritage Ensemble 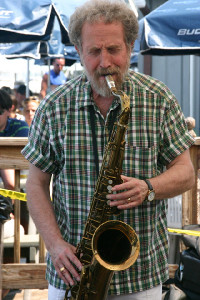 Gerry Niewood—jazz saxophonist and flutist, band leader and long-time sideman to Chuck Magione, Eastman graduate—was a victim of the February 12, 2009, crash of Flight 3407 near Buffalo (along with Coleman Mellett of Mangione's band). He was scheduled to perform with Mangione's band Friday in Buffalo. He came to play in Rochester pretty often; I heard him at the Strathallan in 2007.

Others have already written so much about him, I'll just point you to them (and the many comments that accompany them) and some other places you can go:

So sad to hear of this loss of a Rochester Jazz icon. I must not be staying abreast of the news out of Buffalo because I had not heard of any named victims of the flight. Makes it more sobering, more tragic. Thanks for the news.

Gerry and I were friends growing up in Rochester. I remember a teenage Gerry in my living room, playing a Jerry Mulligan album at a slower speed so that he could transpose the music of a particular tune, for later study. He also told me the the tune we both liked "Demanton", was really "not named" spelled backwards. " They do that" he said. I remember Gerry at college -waking and/or sending the Dorm to sleep with an enthusiastic performance of saxophone finger exercises. Though we haven't been in contact since those years, I followed his career and took great joy in his success.
Life is a journey - Death is a destination, and I am saddened that Gerry has arrived early at that destination we are all headed for - But I like to hope that someday I will be in the audience listening to Gerry play his music and watching him do what he did so well, and loved so much. Just like old times.

Gerry Niewood was about six years younger than me so by the time he emerged as a player, I had already left Rochester. So I never had the opportunity to play with him. In the mid-1970s, he settled in the New York Metropolitan area and lived very close to us in Glen Ridge, NJ.

Gerry was a phenomenal player on all his instruments. And as a soloist, he was what I classify as a "choice notes" musician. In other words, every note he played was in the context of the composition on which he was improvising. To put things in perspective, other artists I put in that category are Bird, Clifford Brown and Paul Desmond. I'm not saying Gerry copied those people, just that he and they had that rare knack of assembling melodic improvised solos that were like beautifully constructed compositions.

He was also a wonderful human being with an even temperament in a very stressful profession. It's a shame that he didn't record more as a leader but he still left a sizable recorded legacy including sessions with Peggy Lee, Lena Horne, Cleo Laine and Gerry Mulligan to name just a few. He was one of those musicians who could make his colleagues on a session sound better.

I'll never forget how he took the time one day to look over some songs I had composed. His comments were insightful and supportive, never derogatory or arrogant.

Gerry will be sorely missed. His legacy lives on in his son Adam, also a talented saxophonist.