About Contact Us Join Our Email List ROC Jazz Artists Info for Musicians & Venues Livestreams
I'm not writing as much, but I can point ... Here's more coverage of Day 2 of the XRIJF
From legends to lunacy . . . June 15th at the XRIJF

XRIJF ends its first weekend ... Day 3 of the jazz festival in Rochester 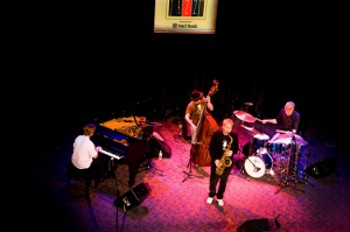 My Sunday, Day 3 of the Xerox Rochester International Jazz Festival, started out on Jazz Street (Gibbs) listening to some more of the great local high school jazz ensembles, procuring a sandwich and libation. Got into a pretty long line for Jonas Kullhammer Quartet. These guys were here 5 years ago and Kullhammer was very happy to be back in Rochester, or at least he said so, quite a few times. Great saxophone, tight quartet AND some standup comedy as well. It was a great set that went from post-bop to emotionally--charged love (or lost love) songs. Ducked inside the Reformation Lutheran Church to catch a bit of Danish trumpeter Søren Kjærgaard's set. Then went over to Christ Church to hear the a great set in the Made in the UK series by the Neil Cowley Trio. Line for California Guitar Trio was already in 1-in-1-out mode, so had no chance there. I had decided to pass on Ernestine Anderson to try to get in with some friends to see CGT. Went back to jazz street and listened to the free show by guitarist Stephane Wrembel before heading over for a bit of my hometown Chicago blues from Eddie "The Chief" Clearwater at 10:00 pm. All my friends went home, I decided there was a chance that there would be some action over at the after hours. Had an opportunity to have a nice conversation with Neil Cowley at the after hours, although not to hear any members of his or Jonas Kullhammer's band (both of which were in the bar) before I left after the second set. By coincidence when I went up to the bar to get a beer next to Neil Cowley, he had recently just "followed" Jazz@Rochester on Twitter and then "retweeted" one of my posts (or actually he retweeted a retweet by the Made In the UK "twitterer" of one of my posts). We talked of Rochester and Twitter as he is a relative newcomer to the microblogging platform.

To read what others are saying out there, here are some links about Day Three of the festival from local media and other bloggers that I've located (I'll add more as I find things):