About Contact Us Join Our Email List ROC Jazz Artists Musicians & Venue Info Livestreams
XRIJF ends its first weekend ... Day 3 of the jazz festival in Rochester
Notes from June 16th at the Rochester jazz festival: Dafnis Prieto, Lionel Loueke and everything in between 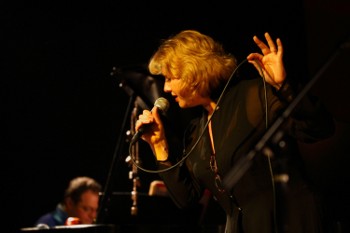 My evening started out in Kilbourn Hall with jazz legend and octogenarian Chico Hamilton with his group Euphoria. Chico has slowed down some in the walking department, as his shuffle out to his drum set showed, but his skills with the sticks and skins, his compositions, and his attitude show he is nowhere near calling it quits (nor should he!). He has gathered around him a band that were all incredible musicians, including Cary DeNegris on guitar, Paul Ramsey on bass, Evan Schwam on reeds, and Jeremy Carlstedt on hand drums. Like a lot of the jazz legends, Chico Hamilton was full of stories and one-liners, but when he was playing he was all business (well, most of the time...). There were no crazy drum solos (the guy's 87, so I didn't expect him to be slapping the skins too hard), but the music was a pleasure to listen to and that's what counts.

Meeting up with some friends, I spent the "middle period" between the 6:00 and 10:00 pm shows talking and listening to the Greater Rochester Jazz Orchestra (with local chanteuse Madeline Forster doing a few numbers) and caught a bit of Stephane Wrembel in the Big Tent before heading over around 9:00 pm to get in line at Montage for the Russian group Andrei Razin and Second Approach Trio. When I got over there ... no line. A tweet I wrote during the set sums my reaction: "Absolute artistry combined with sheer lunacy." Razin on piano, Igor Ivanushkin on bass, and the voice of Tatyana Komova. Razin's compositions are wild, inventive "universes" that involve the whole of each of the artists instruments. Razin and Ivanushkin use all of their instruments (at times, I thought Razin was going to climb into the piano and Ivanushkin was banging on his bass so much that he knocked his pickup clean off and tore a number of guts on his bow). Komova's contribution to this is a rich, beautiful voice that she uses, without words, to mimic a trumpet or other instrument, scat, or create voice soundscapes. Both Razin and Ivanushkin also vocalized. At times the interplay of vocalizations with Razin's and Ivanushkin's playing seemed like a conversation, but again without words. Most importantly, their music, although incredibly serious and highly sophisticated, was full of wild, slapstick humor.  It made for a wonderful musical experience and is a prime example of the festival's catch phrase: "It's not who you know, it's who you don't know."

Due to my day job and a general wish to have fun and perhaps even have an opportunity to relax this year, I am not writing as much during the festival and only "tweeting" during the festival itself. To read what others are saying out there, here are some links about the festival from local media and other bloggers that I've located (keep checking back on their sites as well for continued coverage):