About Contact Us ROC Jazz Artist Sites Info for Musicians & Venues Buy a T-Shirt!
Free Jazz Jam Session for Kids during the XRIJF
Check out 6x6x2009 at RoCo ... One block down from Jazz Street

A day off, some floating and sloshing around ... we take day 6 at the XRIJF in stride 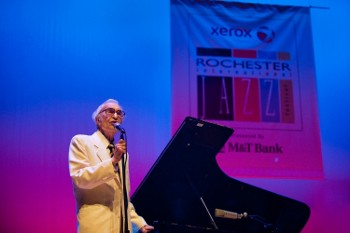 Wednesday night at the Xerox Rochester Jazz Festival felt a bit free-floating, but was satisfying nonetheless. Woke up Wednesday with a sour stomach (too much street meat and beer) and having not slept for most of the morning since getting in after midnight. Although I planned to work at the day job throughout the festival week, by yesterday I had hit the wall and, there being no meetings or deadlines, I decided to stay home, sleep a bit more and do some housework.

I headed down to "Jazz Street" about 4:00 pm and met up with friends. They were going to see Bonerama. While I'd seen them twice before, their 'Nawlins party music was a good wakeup for Day 6. They started out with Jimi Hendrix's Manic Depression, those bones just ripping up the floor boards.

After Bonerama, I caught the last of the set by local composer Dave Rivello's set with his larger ensemble. While I've not paid much attention to larger ensemble jazz, Rivello's writing and his excellent group, and my recent opportunity to see the Maria Schneider Orchestra (as well as some more recent discoveries), have increased my curiosity and interest in this area. Rivello's music is complex and accessible and he gathers great musicians around him to play it. I'm glad I took a detour and took in some of his set.

After Rivello's set ended, I sloshed myself across the street to the Reformation Lutheran Church for the set by NYNDK Collective. Sitting upstairs (not sure I've ever done that before...), it was one of those sets that while I needed to go to the next thing, I didn't want to leave. This group of Danish, Norwegian and U.S. musicians were something different and compelling. ANY group that plays THREE pieces arranged from the music of composer Charles Ives is different and compelling in my book. I have enjoyed the Ives'  music since hearing The Unanswered Question and other pieces years ago in college. To have a group of Nordic and U.S. musicians arrange songs for piano and voice into multi-layered jazz pieces, as well as play the music of Norwegian favorite son Edvard Grieg, reminded me that the "mashups" of genres that I enjoy work in both directions ... and work well.

I broke my streak of not going to hear Dave Brubeck in his three previous appearances here and slipped into the Eastman Theatre to hear a bit of his 4th appearance here at Rochester's festival. I was there a couple of tunes before the intermission and heard the song, Sermon on the Mount, with Brubeck's son Matthew playing beautifully on cello. Brubeck was never a firebrand on the piano, but at 88 still plays beautifully with a lot of touch and sophistication.

My final stop was the 10:00 pm set of Michael Occhipinti and the Sicilian Jazz Project at Max at Eastman Place. This project by Toronto guitarist Occhipinti has taken work songs and other traditional music of Sicily and arranging it into jazz pieces. The band members filed into the venue chanting a tuna fishing song, which was used to introduce (in Sicilian) each of them. These songs that arose from the hard work of that land were compelling in their sparse opening moments when sung in a more traditional way and then opened up with the whole assembly playing, including bassist and older brother Roberto Occhipinti. Another one of the great moments of Rochester jazz festivals where you are exposed to music brought in from the outside of the jazz orbit and then made part of that orbit, played by excellent musicians.