About Contact Us ROC Jazz Artist Sites Info for Musicians & Venues Buy a T-Shirt!
Hangin' with @40,000 of my closest friends ... Day 8 at the Xerox Rochester International Jazz Festival
Jazz Fest is over ... but jazz in Rochester isn't! 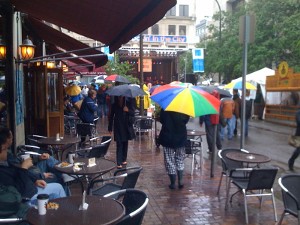 The motto on the new T-shirt I bought on Thursday night is "It's not who you know; it's who you don't know". This is the festival music director John Nugent's mantra and a good descriptor for the Xerox Rochester International Jazz Festival. The last night for this year's XRIJF was a good case in point.

I started out with someone I know—Joe Lovano and Us Five in Kilbourn Hall at 6:00 pm and then turned to those I didn't. It was raining when I got to Jazz Street and throughout the last night of XRIJF, but luckily the line for Joe Lovano was not so far that I had to stand in it (without umbrella). Joe Lovano was one of my "must sees" for this year's festival. Us Five is a new project that features his wife Judi Silvano as a vocalist, although singing songs is not her role. Using her voice to scat or mimic instruments, Silvano adds to the quartet of James Weidman on piano, Cameron Brown on bass, and the outstanding Francisco Mela on drums to make it a quintet. Lovano's set was fantastic, starting with the title piece off his new album with the Us Five Folk Art and including other tracks off the album and standards like Mal Waldron's Soul Eyes. In addition to tenor sax, he played an aulochrome, a double soprano saxophone, tuned to different keys that created a sort of two tone (except when he concentrated on one side of the mouthpiece). His compositions were inventive and fun. He also gave the rest of his band, including his wife, wide areas to shine, which they all stepped up to regularly.

I sloshed my way through the puddles, slowly, as excessive use and tucking behind seat backs had blown out one of my two bad knees, over to the Reformation Lutheran Church for my last taste of the Nordic Jazz Now series with Delirium. This quartet of Finns and Danes were very playful and inventive, with compositions and playing mixing straight ahead with freer sounds. I especially liked the second piece, which was an almost 1920s stomp, punctuated with periods of zany dissonance. The cornet/trumpet player stood out for his versatility with the horn, constantly changing the sound of his horn with dampers and other tools to get desired effects.

I finished out the 2009 Rochester jazz festival by checking out the last of the Made in the UK Series groups, Tim Garland's Lighthouse Trio, over at the Christ Church. Reed many Garland arranged music on Chick Corea's new album The New Crystal Silence, worked with vibist Joe Locke on a project, and I'd heard great things from various folks about this group. The Lighthouse trio consists of Garland, Asaf Sirkis (who plays a custom built set of frame drums, bass Udu, Hang drum and other percussion instruments), and the young pianist Gwilym Simcock. There is no bass. With the ambient noise of the rain outside providing an added layer, these three created a tapestry of inventive music in the now great sounding space of Christ Church. Due to my knee needing some attention and the great music I'd just experienced, I decided to go on home and skip the after hours. The Lighthouse Trio was a great way to end this year's festival.

For more, I'll point you toward stories and posts in the Democrat & Chronicle, City Newspaper, and any blogs or other sources I can find: