On October 12th, the night before his 80th 82nd birthday, alto saxophonist Lee Konitz will join Eastman School of Music Jazz Studies Chair Harold Danko for a night of music in Kilbourn Hall at 8:00 pm. The concert is free. 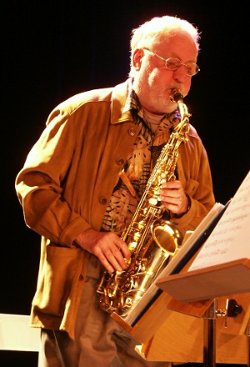 During his long career, Lee Konitz has played with musicians from a wide variety of jazz styles, including being associated with the Cool Jazz movement of the 40s and 50s, participating in Miles Davis' Birth of the Cool sessions and working with Lennie Tristano. Pianist Danko worked with Chet Baker, Gerry Mulligan, Thad Jones, Mel Lewis, and Woody Herman. Konitz and Danko have been musical partners for more than 30 years and have toured and recorded together a number of times in that time. Sessions that they recorded together included the duo albums Wild as Springtime (Candid 1984) and Once Upon A Line (Musidisc 1990), RichLee! (SteepleChase 2000), Dearly Beloved (SteepleChase 1997), Ideal Scene (Soul Note 1986), The New York Album (Soul Note 1987), Dovetail (Sunnyside 1983), and Yes, Yes, Nonet (SteepleChase 1979). Here's Lee in Minneapolis in 2007.

The performance will include selections from these as well as a tribute to Lee's friend and collaborator, George Russell, who passed away earlier this year. Konitz recorded Russell's compositions Odjenar and Ezzthetic in the early 1950s with an all-star group including Miles Davis. Konitz and Danko will be joined by current Eastman students Ben Bishop (guitar), Mike Van Bebber (trumpet), Kyle Vock (bass), and Kevin McDonald (drums) in transcriptions from the original recordings.

Got Lee's age wrong, but at least I erred on the side of younger! I couldn't believe Lee Konitz was 80.... Go Lee!

Many thanks for information.
Can you add titles? Is there somebody around who recorded this performance?
Dr. Michael Frohne
to keep the Lee Konitz discography up-to-date