About Contact Us ROC Jazz Artist Sites Info for Musicians & Venues Buy a T-Shirt!
Jazz Around Town: A week of jazz in Rochester, New York
On offer this week ... Michael Musillami Trio presented by Bop Arts Jazz in the Atrium & Jeremy Pelt Quintet presented by Exodus to Jazz

Please shelter this sister from the house of bondage till five OClock this afternoon - She will then be sent on to the land of freedom. Yours Truly Fredk

These words scrawled by abolitionist Frederick Douglass on a note to give safe passage on the Underground Railroad to a slave moving north to Canada are among other powerful words, culled from Douglass's speeches and writings and combined with the music that sprang from the African-American experience, in the wonderful new CD A Sky With More Stars, set to music by Philadelphia-based jazz bassist/composer Tyrone Brown, who has performed and recorded with Grover Washington, Jr., Max Roach and Odean Pope. 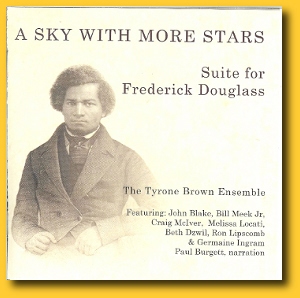 The CD sets spoken word passages of Douglass’s writings and speeches with music composed by Brown and violinist John Blake and performed by an ensemble that also includes Bill Meek on piano, Craig McIver on drums, Melissa Locati, Beth Dzwil, Ron Lipscomb and Germaine Ingram. Douglass’s words are spoken by Paul Burgett. The idea for the CD came from Richard Peek, director of the Rare Books and Special Collection at the Rush Rhees Library at the University of Rochester, which currently has a an exhibit on "Douglass in Rochester."

For more coverage of the CD, check out Jack Garner's January 22nd article CD combines power of Frederick Douglass, jazz ensemble in the D&C, Lee Mergner's article for JazzTimes.com Tyrone Brown Album Salutes Frederick Douglass, and Ron Netsky's review of the CD in City Newspaper. Additionally, Tom Hampson will play the entire CD on his radio show, Mostly Jazz, this weekend on WXXI AM1370 from 7:00 to 8:00 pm on Saturday, and repeating on WRUR FM88.5 from 8:00 to 9:00 PM on Sunday.

You can buy A Sky with No Stars from Amazon

, directly from Tyrone Brown's publisher Dreambox Media, or from local record shops like the Bop Shop.