About Contact Us ROC Jazz Artist Sites Info for Musicians & Venues Buy a T-Shirt!
Bop Arts brings the "puckish and virtuosic" Konk Pack to Rochester tomorrow
Jazz Around Town: Hot and cold ... it's that time of year

Riffing the Links: The return (again) of riffing off some jazz links 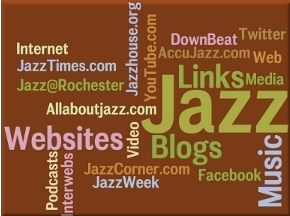 I'm always finding new links to put out there for you, but sometimes I just don't get them into a post. You can also find occasional links on Twitter and the Jazz@Rochester Facebook page, some of which may be repeated here, but not all. So here are a few more... I'll look at my feeds and find some more soon.

If you have a jazz link to share with the Rochester jazz community and beyond, send me an email by clicking on the Send an email to Jazz@Rochester link in the left panel.

The Rochester Music Hall of Fame is hosting its first event – a Launch Party on Friday, April 30, 2010, at The Historic German House and The Keg, 315 Gregory Street. The doors open to the general public at 6:30 pm, and twelve bands begin performing at 7:00 pm.

Tickets will be $15 in advance/$20 at the door and are on sale beginning April 12, 2010, through Ticketmaster online, Ticketmaster locations at 885 East Main Street, and House of Guitars, 645 Titus Avenue. Tickets will also be available at Aaron’s Alley, the Bop Shop, The Keg, Northfield Music Studios (Pittsford), and The Music Store, Inc. (Webster).

Is that what you meant by adding it myself?