Day 2 at XRIJF: Meetup that wasn't and other notes 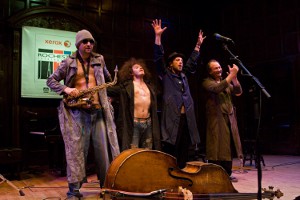 As I noted in my pick post for Saturday, I was going to meet with a few alumni of the University of Chicago (I am the contact/president of the regional alumni club) early and possibly escort them to one or more sets at the festival. For various reasons, the meetup didn't happen. I got a chance, while waiting for the few that might show, to hear more of the great high school jazz bands that play on the Jazz Street Stage early. The audience is very supportive (and one might expect that as many of them are related to those on stage), but everyone enjoys them. Buffalo's Academy of Visual and Performing Arts was a standout for me as their choice of music and playing was so much different from the rest.

The first set on my itinerary was the Terry Clarke Trio was wonderful, with Greg Osby on saxophone and Don Thompson on piano and bass, alternatively.  His most recent album, It's About Time (Blue Music Group), won best traditional jazz album last year in Canada's Juno Awards. The interplay between them sometimes seemed like they were one instrument, with interspersed solos of great sensitivity. Again, Xerox is a great hall for trio work.  Followed up that with some of Torben Waldorff's group at Nordic Jazz Now in the Church of the Reformation. In addition to Seamus Blake's great sax work (which I've enjoyed before when he's come with his own band and others to Exodus to Jazz), I enjoyed the Waldorff's guitar, which was full of clean lines and not focused on the wow factor and overplaying that sometimes accompanies guitar-led groups. Waldorff was stepping back and letting the others shine. Walked through the increasing rain over to Christ Church to catch Brass Jaw. Although there was a distraction sitting a bit too near, the playing by these 4 Scotsmen on saxes (alto, tenor and baritone) and trumpet were deep into the jazz tradition, but had a new take on it. They used the soaring space of Christ Church to great effect, moving in and around each other as they took solos, pointing their horns in different directions, and on some songs just getting off the stage and walking throughout the church while playing. The notes careened around the space (especially those of trumpeter Ryan Quigley) like Super Balls, bouncing into your ears from different directions and sometimes all directions. As Ron Netsky notes in City's Jazz Blog, "[t]hey took the audience on a journey from straight-ahead to avant-garde and back, and we stuck with them every step of the way." Finally, sloshed over to Abilene to check out the Blaggards. While I meant only to have a beer, listen and check out the space a bit, I met some friends and ended up staying until the set of this group, described by Jeff Spevak on Twitter (yes, Jeff is on Twitter) as "drunken irish texans, ... going supernova on beer-waving jazzbos ... Pogues, meet social distortion." Pretty apt description. The Abilene space (the bar is one of my favorites in town) is a great addition to the festival, in my opinion. They've definitely got the best beer selection in the festival (in the bar). While walking from place to place I heard locals Filthy Funk with the powerful voice of Black August's Danielle Ponder just killing it on the Jazz Street Stage. Frank DeBlase thinks she may have helped open up the heavens just after they concluded their first set.

For many other attendees, the fest was all about Catherine Russell and the second night appearance of the boys from St. Petersburg, Billy's Band, who completed two more sets in Kilbourn Hall on Saturday, bot of which held their audiences in their seats for the entire set (which is unusual in this festival as there are sometimes tight timeframes for those of us who like to squeeze too much into each night).  Will Yurman's first multimedia essay (for June 11) is about the latter.

I don't know how to lasted through any performance at Christ Church. The acoustics in there are so bad, I had to leave the one performance I attended. I won't go in there again, as it is too distracting to listen to the sound reverberate off the stone. I can't stand it.