About Contact Us Join Our Email List ROC Jazz Artists Info for Musicians & Venues Livestreams
Jazz Around Town: Some of the "other" jazz going on around Rochester
Tomorrow's the end of the Xerox Rochester Jazz Festival ... Really?

When I got back to my car at nearly midnight, since Steve Turré Quintet (well his regular quartet, plus special guest Texas tenor Billy Harper) played well past 11:30 pm, the battery was dead as a doornail. I've also been slowing down a bit as I try to maintain a schedule of going to work each day and out to the Xerox Rochester International Jazz Festival in the evenings. Because I spent the morning getting my car jumped and out of the East End garage, I just haven't the time to write much. Here's some random notes from my sixth night at the festival. 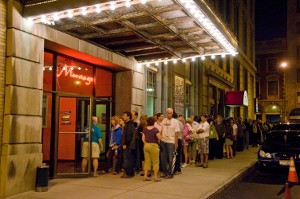 Mixing sax player and chanteuse with equal measure and a lot of cuteness, Grace Kelly was a big crowd pleaser (the line for the first set was all the way to Broad Street and many were turned away; same for the second). But once you get past the wow! factor of the amazing amount of talent Kelly has on her instrument, as a singer and as a composer (and how long and with whom she has grown up as a player), and at the ripe old age of 18, the wow wears off a little and the room she has to grow becomes more apparent. But who would expect her to spring from the head of Lee Konitz, et al fully formed? She's an accomplished performer and has been for quite a few years. Kelly  will definitely be a talent to watch grow, but the soul and emotion that I heard in Billy Harper's playing and elsewhere this year just wasn't there yet.

I love listening to music that takes me out of my comfort zones and Eivind Opsvik's Overseas group did just that, creating an intricate mesh of sound that was modern, yet also had elements of monster movie theater organ and other odd influences. I especially liked Opsvik's composition Nineteen to a Dozen. 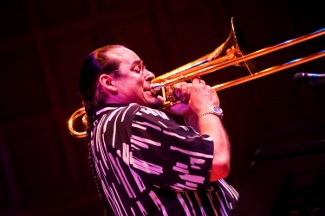 Finished up the night with Steve Turré's trombone and conch shells. I saw Turré perform at Milestones a few years back and he is a master at his instruments (both marine gastropod and brass). I was so tired I almost didn't go, but thought better of it. I saw a weather change begin to throw drops around, so I got a beer and a sandwich and got under Eastman's big awning to wait for his Kilbourn Hall show.  So glad that I did. His special guess Billy Harper on tenor and his regular quartet of Xavier Davis (piano), Corcoran Holt (bass), and Dion Parsons (drums) formed a tight fit with Turré's trombone and conch playing. Turré is always trying to make sounds; he's almost OCD up there, comping by picking up one conch shell or another to get just the right sound out of it, or one of several cowbells with different ringers to get just that right amount (no, no one yelled "more cowbell!"). Unlike the first set where I read that he only played the shells a couple of times, Turré worked them in a lot in the long second set, beginning with the first on the play list, the cut A Light Within from their new CD due out in August.

I'm glad to read what you had to say about Grace Kelly because I was really bummed to not be able to see her. Now, I can wait until she's a little more grown up, until she's experienced a little more of life. Then, it sounds like, she'll be well worth the wait.