Grooving with my buddies Mel Henderson, Gerry Youngman and Sean Jefferson at Tala Vera (see Wednesday's post). They're recording some live cuts tonight ... plus some more of that salsa .... 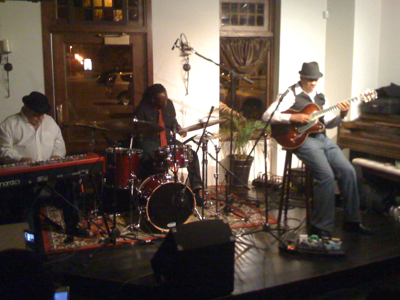 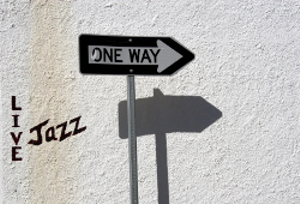 Putting together the post offsite at the most recent entry to the jazz venue scene here, Tala Vera Cantina, sipping some XX and having some of their habenero based Salsa Verde-Muerta while I wait for Rick Holland Quintet to come in and perform. Oh, and writing this post... I'll have more on Tala Vera in a later post, but artists (not just jazz, too) should link through to their site and contact Bernard Matthews, the owner, about gigging here. They're just getting started ... we need to support new venues! Now to the listings (and me going to try out some of Tala Vera's California-Mexican food):

According to a press release issued today, the Club Pass for the 10th Anniversary edition of the Xerox Rochester International Jazz Festival, to be held June 10-18, 2011, go on sale this Friday October 29th at 10:00 am. The lineup for the XRIJF 10th Anniversary will be announced in late March.

The Club Passes will be sold at a special holiday price of $130, plus $4 service charge, a savings of $45 off the price they will be closer to the start of the XRIJF. More than half of all Club Passes available last year were sold before the end of December and the Club Pass completely sold out before May for last year’s festival.

The Club Pass is the best way to hear the festival, giving you the chance to catch up to 185 shows over nine days and offering a significant savings over individual concert ticket prices of $20 and $25 per show (well, you can't really catch them all, but you can try...). Entry to all Club Pass shows is on a first-come, first-served basis with the Pass or through tickets purchased at the door. Individual Club show tickets are not available in advance.

With so many ways of taking and sharing live video available, starting today, I'm starting a "regular" (admittedly, nothing has been much regular about my postings recently except for Wednesdays) post showcasing videos of performances of local jazz artists and groups or of artists/groups who have strong ties to the Rochester area. What better way than to bring you a video recently sent to me by NYC artist pianist Enoch Smith Jr., a Rochester native now living in New Jesey, Remembering Rochester:

While I have a lot of source material to work with, I'd appreciate being pointed to additional links, especially to performances from further back in Rochester's rich jazz history.

Jazz Around Town: Rochester jazz listings for you, served up hot (or cold depending on the day)

Don't have much time to dawdle here, so without much intro I'm going to serve up listings for live jazz in and around Rochester over the next seven days.

Jazz Around Town: What's a Meliora? So much music, so little time...

This weekend there's lots of music of all kinds around town due to the University of Rochester's Meliora Weekend, including the Eastman School of Music. Of course, the main event is bassist Ron Carter's appearance here on Saturday afternoon with his Quartet (you bet I have tickets and am grooving to Carter's Dear Miles album while I write this). Later in the week there's chances to hear the Mikolaj Trzaska, Steve Swell Duo, Bobby Militello Quartet with Gap Mangione, and Bob Brookmeyer with the Eastman Jazz ensembles. So much jazz, so little time.... 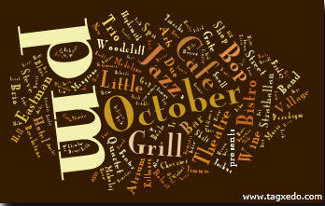 They are turning and falling and you know what will start falling soon. Our local jazz station, WGMC Jazz 90.1 is starting up their Fall pledge campaign soon and if you pledge early you get a special CD gift (more here). A little light later in the week, but here are the jazz listings for the next seven days.

There are so many ways to get Jazz@Rochester .... 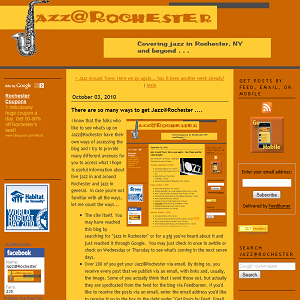 I know that the folks who like to see what's up on Jazz@Rochester have their own ways of accessing the blog and I try to provide many different avenues for you to access what I hope is useful information about live jazz in and around Rochester and jazz in general.  In case you're not familiar with all the ways, let me count the ways...

I encourage you to explore the site and let me know what you'd like to see more of, less of (yes, I know there are some of those...). If you have any questions, don't hesitate to ask... here, via email, on Twitter, on Facebook, by commenting on a post, or even if you see me at a gig. In essence, I've been trying to build a community around live jazz here in Rochester, which has made and is making so many contributions to jazz and will slowly fade away if not supported. I love the music, so I can't sit by and let that happen. I encourage you to join the community.