Is jazz not "fun" enough for you? Do you expect to see it in a venue known for cutting edge music but with a more rock sensibility? Surprise!... unusual jazz will be presented in an unusual place when NY band Mostly Other People Do The Killing hit the stage at Rochester's The Bug Jar this Thursday, April 21st. MOPDTK Bassist Moppa Elliott has written that "[r]ather than settling into one style or historical period, MOPDTK fuses the entire spectrum of Jazz and the various forms of improvised music it has spawned into a single, seamless melange of Uber-Jass." While there is a lot of craziness and free(dom) in what they play, they are also well rooted in the traditions of jazz, similar to the way most of their album covers, like the This is Our Moosic cover here, nods back to Ornette Coleman (and all of them nod to one or another). While MOPDTK go for humor and mashup in their music, these guys are serious players with serious writing and playing chops. As Vern put it in the JazzWrap blog "...don't let their artwork and song titles fool you. Mostly Other People Do The Killing mean business and they do it quite well." While I've yet to see them live, which is how I like to experience jazz anyway (if you haven't guessed), what I've heard reminds me a lot of a band I saw (and one that apparently inspired them some) only a few weeks ago when Bop Arts presented the ICP Orchestra here. Their 2006 album Shamokin!!! began getting them a lot of attention and in 2007 MOPDTK was nominated by the Jazz Journalists' Association for Small Ensemble of the Year and in 2009 won a DownBeat Critics' Poll in the Rising Star category.

MOPDTK will be preceded on stage by local bands Bending and Breaking and The Bitchin' Kitchen. Doors open at 7:30, with the music commencing at 8:30 pm. You can find the details on the Bug Jar's site. I hope to see you there. This is a first for me since moving to Rochester (now quite a long time ago...). I haven't always been mostly a jazzhead. While I used to hang at clubs in Chicago like the Bug Jar (the Lounge Ax was one, later the Hideout), I've not found my way into The Bug Jar to date. So much music, so little time.... 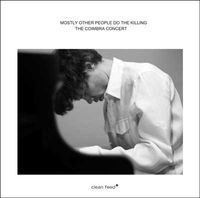 There is much more info on the band at MOPDTK's label, Hot Cup Records site, reviews of their 2011 debut Clean Feed CD The Cohimbra Concert (yes, that's a nod to Keith Jarrett...) on the Burning Ambulance and JazzWrap blogs. This is a great CD to check out if you want to hear them before the concert as it is a live album and, from what I"ve read, captures them well.  Or you could check out the YouTube videos, like this one from Oslo in 2010 or this one (it's the first of several parts) from the Moers Jazz Festival.

Hope to see you there!