About Contact Us ROC Jazz Artist Sites Info for Musicians & Venues JazzRochester T-Shirts
So much music, so little time: Picking the Jazz@ Rochester itinerary for XRIJF 2011 begins
Jazz Around Town: Rain, rain, go away! Perhaps some hot jazz will dry it up?

Let's get this party started ... My picks for June 10th of the Xerox Rochester International Jazz Festival 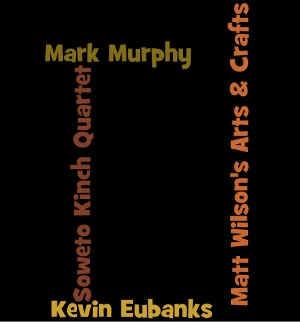 Here's the first of nine posts in which I'll outline my "itinerary" for the nine days of the Tenth Anniversary version of the Xerox  Rochester International Jazz  Festival. As I noted in the kickoff post for this year's coverage, I encourage you to add your thoughts on each night's choices, as well as your own choices, in the comments on the post itself or on Twitter and Facebook (although I request some degree of civility please). Just remember that I fully subscribe to RIJF musical director John Nugent's favorite chestnut: "It's not who you know, it's who you don't know..."

The links below on the artists' name in bold will take you to the artist's page on the XRIJF site. Where available, I've mined a few additional sources and video of the artists from the Interwebs to help you decide whether you want to join me (figuratively, that is...). I'll add a set of links to these posts in the right panel under the XRIJF logo after I get a couple published.

So on June 10th, the first day of the Tenth Anniversary of the Xerox Rochester International Jazz Festival, the following gigs will be where you'll probably find me (but not necessarily...):

If I can somehow fit it in, I'll catch some of the old school of Mingo Fishtrap at the Jazz Street stage on Gibbs, perhaps only in working my way through the crowd to get from one venue to another.

So whattayawaitinfor? Let me know what you think!  If not, I hope to see you on Jazz Street....

I can't believe you didn't have Tia Fuller on your list!!!! This girl can really, I mean really blow!!!! When Mike Melitio heard heard when we played at the African American festival 2010 aired on channel 13 he said WOW!!! Tia Fuller had a number one jazz cd Decisive Steps for weeks!!Playing with the John Faddis Big Band !!! oh yea!!Come on now you can't deny her credits or her ability to play straight ahead with big bands as well as playing with the number one diva Beyonce!!!

Not denying her talent, just have choices to make and I made different ones that night. Since this post, I've been adding links to more of the artists I'd like to see, but couldn't fit them in. Tia Fuller was definitely on that list.