About Contact Us Join Our Email List ROC Jazz Artists Info for Musicians & Venues Livestreams
Jazz Around Town: Rain, rain, go away! Perhaps some hot jazz will dry it up?
Jazz Around Town: A sweet sixteen days until we begin days of music at the XRIJF

A triple of Trios ... My picks for June 11th of the XRIJF 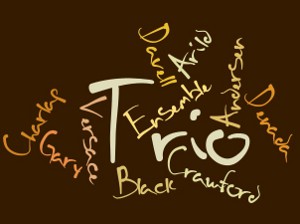 For some reason, my second night at the Xerox Rochester International Jazz Festival full of trios, although they will be quite diverse in their sounds. I have found in past years that some days will abound in trios as the preferred grouping at the XRIJF. But I intend to make up for it by checking out a larger ensemble (talking 3-4 times larger) and, possibly, even catching some something that clearly won't be on anyone's jazz listings to reduce my trio load.

The links below on the artists' name in bold will take you to the artist's page on the XRIJF site. Where available, I've mined a few additional sources and video of the artists from the Interwebs to help you decide whether you want to join me (figuratively, that is...) during my walkabout at the second evening of the Xerox Rochester International Jazz Festival on June 11th:

I may, depending on my mood, lines and a host of other factors, try instead to catch Black 47 at the Abilene Roots & Americana Stage at 9:45, the NOLA jazz of Davell Crawford at Max of Eastman Place, or the specifically not gypsy jazz of Les Doigts de L'Homme @ Montage in the 10:00 pm slot.

Of course, you be catching some fake Beatles (or should I say "faux"?) or some Jersey boys sounds on Saturday night but, if not, let me know what sounds you're planning on hearing in the comments. See you on Jazz Street....

Gary Versace is part of Matt Wilson's Arts and Crafts. The last time they were here they put on an amazing show at Montage. I ended up returning for the second show. "Feel the Sway"! Those that were there know what I mean. For me this is a don't miss.

Arild Anderson did a great duet album with Shiela Jordan. She is scheduled to be here on Sunday. It would be great if she sat in for a tune or two.

That second show of Matt Wilson's Arts & Crafts was one of times I heard Versace play with the aforementioned "other artists", Hal. Didn't mean to diminish the show, just admitting the many variables that often go into deciding on the 10 pm are often on the spot—at least for me.

I hope you check out Tia Fuller and Champion Fulton!! Two good friens of mine that are very very good.