About Contact Us Join Our Email List ROC Jazz Artists Info for Musicians & Venues Livestreams
Keeping it light, at least until tonight ... Day 7 at the XRIJF
Tailgating and the XRIJF endgame...Day 9 of the festival 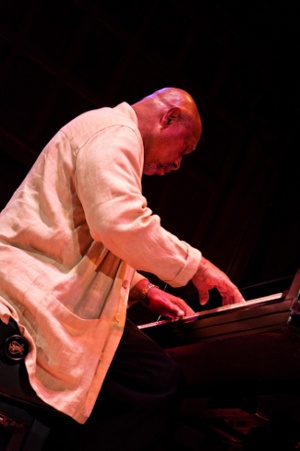 The Kenny Barron Trio brought the hall down at Kilbourn during the first set with a mixture of standards and his own compositions. In addition to bassist Kiyoshi Kitagowa, Barron completed his trio with drummer Johnathan Blake, who I've seen perform here before with Joe Locke in 2008, and more recently at Exodus to Jazz with pianist Lynne Arriale and bassist Omer Avital. Ranging from standard trio fare to calypso and a Eubie Blake solo piano number, Barron showed his mastery of his instrument and his good choices in bandmates. Drummer Blake played such a monster solo that those who were still breathing rose and gave him a standing O. I especially enjoyed the fast paced New York Attitude, which the group romper through at an incredible clip.

Again, a deeper rut was carved in the path to the Reformation Lutheran Church, where I grossed next to catch the project of former E.S.T. Bassist Dan Berglund—Tonbruket—a Swedish word for "workshop." Although Berglund had been to a prior Rochester jazz festival with E.S.T., like many of the bands that grace the Church's stage, this was the first U.S. appearance for his new project. Berguland formed Tonbruket after the death of E.S.T.'s pianist Esbjørn Svensson in a scuba diving accident in 2008, with Martin Hederos on keyboards and violin, Johan Lindstrom on guitar and pedal-steel guitar, and Andreas Werliin on percussion. Lindstrom's pedal steel was probably the first of those instruments to be found on the stage at the Church, but he was not using it to get that country twang, but rather a haunting effect. The music was genré-less, moving from the ethereal, electronically-enhanced ruminations that are a common sound in the Nordic Jazz Now series, through anthemic rock, to an almost surf sound at times. The audience stayed in their seats and enthusiastically greeted Tonbruket in the first set. Another fine example of these artists pushing boundaries into new, and very satisfying, spaces.

After a quick stop to listen to Elvis Costello near the beginning of a three hour set in Kodak Hall of Eastman Theatre, I made my way through the crowd on Gibbs and those listening to Trombone Shorty to the Montage (well, I went around through the walkway near Christ Church rather than try to move through the crowd itself), I sat down in a nearly empty Montage. While waiting for the last set of In The Country, I worked on this post and watched the XRIJF twitter stream for a bit.  In the Country hails from Norway (the Nordic Jazz Now series is popular enough that its artists sometimes come back to new venues) and is a piano trio with Morten Qvenild, bass player Roger Arntzen and drummer Pål Hausken. Some may remember them from last year and from the "torch fishing" story that Qvenild tells (fishing at night with flashlights and banging the temporarily light stunned and spawning trout  on the head with a handy object to catch them). In The Country music seems, well, connected to the country, the landscape around Oslo and the wildlife that inhabits it (Qvenild indicated that there is a beaver dam outside his apartment window) in their piece Beaver Creek, which had an almost gospel sound to it. It would rise and fall from introspective murmurs to a forceful torrent of sound, driven by Qvenild's piano. The chord changes in some of the songs in their set moved in odd ways, but they were oddly compelling. I then headed over to the Rochester Plaza hotel and spent a bit of time with some friends at the after-hours last night, which was pretty subdued for the penultimate night of the festival (albeit, I didn't stay to the bitter end).

We move on to the last night of the festival (is it over already?). We start out with violin of Regina Carter in Kilbourn Hall (this festival is one where I've started in Kilbourn almost every night... has been unusual in recent years). I'll then try to catch some of the Po'Boys Brass Band and the Budos Band. I decided to try to catch Jonas Kulhammar in the more intimate setting of Max to end out the festival this year. Now the lines and Kulhammar's popularity at the festival may throw these plans into some disarray, but I'm not worried. I've had a great 2011 XRIJF and heard more than enough good music to be sated.