Still at it after all these days... Day 4 of the XRIJF

My feared illness was a no show, instead most likely the result of a local tree spewing forth its pollen, so feeling better I ventured out into the venues of the XRIJF on Monday, although decidedly subdued in consumption of beer and street meat. 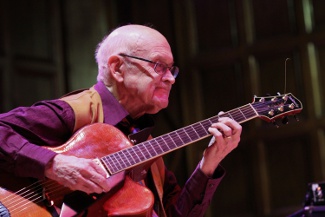 Started out with the subtle mastery of guitarist Jim Hall. I loved the way he would break apart a well-worn tune like My Funny Valentine and put it back together in a unique way, coming at its themes from different angles.  With a stellar group of musicians behind him—Greg Osby on sax, Steve LaSpina on bass, and Joey Baron on drums—though stooped and slow in movement onto the stage, was nimble on the guitar and witty in the between tune repartee with the audience. Billy Strayhorn's Chelsea Bridge, featuring Osby, was a highlight for me.

In what seems to have become a pretty worn path, I headed over to the Lutheran Church of the Reformation to catch Finnish pianist Mika Pohjola (although Mika ended up with a quartet, rather than the quintet indicated). While part of the Nordic Jazz Now series the players were all based in NYC, although hailing mostly from other parts of the globe. There was a lyrical, almost classical style to Pohjola's playing, sometimes sparse and minimalist repetition of phrases. He would work a theme or a short burst of notes (and he could play these "bursts" with lightning speed), over and over, with slight variations throwing in different colors. Intricately composed with interweaving lines between the piano, sax and other instruments caused Pohjola's bandmates to be constantly checking with each other for cues on where they were heading.

After leaving there and downing a cup of that great Beale Street gumbo (and a malty beverage), with some regret that I couldn't get the Rodriguez Brothers in, I headed over to Montage with some friends to catch the funky grooves of Triodes, a project of Toronto musicians Michael Occhipinti and Mark Neufeld (with Michael's brother Roberto, who Michael quipped probably has stock in this jazz fest given all the times he appears here with one group or another). Working the grooves of Occhipinti's Big Belly (an ode to his son and, apparently, his son's mother's pregnancy) to start, they played a long set of original material and covers of the Meters (yes, in the second set we also were "clucking" to the Meters' Chicken Strut as they had in the first)and reggae. Try as they might, and the music had the groove to do it, they could not get the tired, late Monday show audience off their bums and dancing—including this one, although I thought my chair might break from the bouncing I was doing.

Due to some responsibilities at work and elsewhere, I will be taking it pretty light on Tuesday and Wednesday, reducing my schedules posted here and here a bit (although I encourage you to try them all...). Tonight I'm catching Trio Oz and then Phronesis. Tomorrow, only Many Worlds with Greg Burk at Max.