About Contact Us ROC Jazz Artist Sites Info for Musicians & Venues JazzRochester Merch
Making my way through Day 8 of the Rochester International Jazz Festival
Jazz Around Town: Back to your regularly scheduled programming ....

I have a friend that lives near the festival site and met there with some friends on the last day to have a short tailgate party before heading out for our final evening of music. While we may start earlier, this may become a tradition that continues on the last day of the XRIJF... I like that. I left the tailgate (well, we were more on the stoop of my friend's apartment building, although we were in a parking lot, the cars were mostly parked elsewhere) and realized I should have left a bit earlier when I came upon the line for Regina Carter at Kilbourn Hall—my first choice for the evening. While I knew I would get in, I just didn't want to stand on Swan Street for two hours, so I headed up the alley to Gibbs and, eventually, got into the line for Jonas Kulhammar's first set at Max. While I regret not having the opportunity to hear Carter's Reverse Threads project with her take on integrating African music, seemed like a good choice as I wasn't sure I'd be able to hear other things and get into the late Kulhammar set. 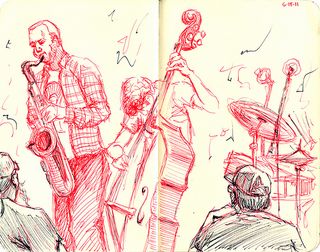 Kulhammar poured on the charm and dry wit he's known for, fawning over us with his love of Rochester ("I'll have to spend millions on therapy if we're not invited again...") and its festival, producers, etc. I think he's actually sincere as this city has given him a lot of love over his 3 visits to the RIJF, plus he gets to "see his friends here and have lunch, dinner and breakfast at Dinosaur BBQ". While a comedian between the pieces in the set, Kullhammar's all business when it comes to playing. He and his band are tight, a testament to the 13 years they've been together. I've previously heard Jonas Kullhammar in the larger settings of the Xerox Auditorium and the Reformation Church, so getting a chance to hear their set in the more intimate environs of Max at Eastman Place was a treat. It was a great post-bop set with the chemistry of this band creating a whole that was more than the sum of its parts. For us first setters, Kullhammar left us with a final thought, telling us "I have bad new and good news ... The good news is that we're playing again at 10:00 pm ... the bad is that we've saved all the good ones for that set."

Wandered around a bit, listened to the Po'Boys Brass Band blowing down the crowd on Gibbs Street and catching a bit of The Budos Band, before taking the long route over to Montage (as I had done on Friday) to avoid the .38 Special crowd to catch my last show of the 2011 XRIJF—Ben Allison 3. I believe Allison was brought in to replace Supersilent and it was a great choice for the end of the festival for me. A trio with Allison's bass, backed by Steve Cardenas on guitar and Shane Endsley on trumpet, their set at 10:00 pm was mellow and quirky. The mellow I like at the end of the festival as...damn...I'm exhausted; quirky is just the way I roll with music. The sound was sort of like a Bill Frisell set with the focus on the bass, on which Allison is a monster.

Sated, happy, with a lot of great music from the past nine days dancing around in my head (and a few in my CD changer), I was somewhat happy that my friends had decided not to do the after hours scene, either at Rochester Plaza or Abilene. While I would have loved to catch the John Nugent/Jonas Kullhammar sax duel at the hotel after hours, but I was ready to put the toe tag on it.

More over the next few days and, of course, my usual coverage of live jazz in Rochester.