About Contact Us ROC Jazz Artist Sites Info for Musicians & Venues JazzRochester T-Shirts
One satisfied customer ...
From a trio of trios to 2 trios & a quintet of trios... Second night of the XRIJF

Day One of XRIJF...Haven't learned to relax yet...

Great first day of the Xerox Rochester International Jazz Festival.  Weather was great.  Managed to hear Kevin Eubanks, some of Mark Murphy's and Soweto Kinch's second sets, and Matt Wilson's Arts & Crafts. Have to say that Matt Wilson's Arts and Crafts will be one of my highlights from this festival (as it was the last time they appeared). last time they appeared at RIJF). Matt will be playing with Gary Verace Trio in the Italian Series tonight. Although there was one tune they seemed to be still working out, this band stunning musicianship, their tight work as a group, and Wilson's humor and inventive drumming made it a treat.  I really wish I could have worked in more of Brit Soweto Kinch's set, although I stuck around the after hours long enough to hear a great solo from Kinch when he played near about 2:00 a.m. 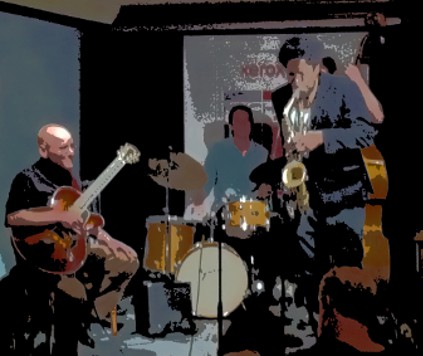 I engaged in some speculation in my last post before the XRIJF started up about writing more from the festival, relaxing more, and running around a bit less, "special posts" and the like. Wasn't truly successful in that in trying to keep to that new "regimen" and I'm already seeing a lot of posting will just not happen if the "relaxing more" thing is to be done.  This is especially true as I will be working all next week, perhaps half-days on some. Don't want to set expectations either for you or myself that I will not be able to keep. So, while I'll occasionally write a post and may post some pictures and other shorter items, most of the "work" I do on this blog is done before the festival, so I can concentrate on the music and fun during its 9 days. I'll just try to put people and information about the festival together as much as possible, using my most effective tools.

The fact is, that there are a lot of people writing about the festival, many of whom are actually paid to do so and do it pretty darn well. Yesterday as I went from venue to venue, and the after hours, I was mostly working the Twitter backchannel to the festival, stoking the hashtag #XRIJF conversation where possible. This morning I have been feeding links to the writing that is being done out there about the first day and coming artists to the @jazzrochester twitter account and Jazzz@Rochester Facebook page. There are a reviews of Day One by writers at City Newspaper and the Democrat & Chronicle, plus a new Jazz Stories video with Tia Fuller. I encourage you to check them out. There's an interesting post  by Patrick Jarenwattananon in National Public Radio's A Blog Supreme about the festival and the pull between festival and "jazz."  Also check out the Storify story created by D&C Young Professionals Editor Todd Clausen that pulls together a lot of the social media coverage of XRIJF (although curiously missing the D&C's hashtag #rocjazz). If you're onTwitter then follow @jazzrochester or the list of tweeting XRIJF artists and other XRIJF sources I've been building. Use the hash tag #XRIJF to join the conversation (and if you have room and want to be included in the D&C's coverage, #rocjazz. If you don't want to sign up for Twitter, but want to check out the conversation anyway, then click on the XRIJF on Twitter button at the top of the page for a page with a running stream of tweets from the festival. A lot of will also be republished on the or Jazz@Rochester Facebook page.

Tonight I'm hitting Bill Charlap Trio, Arild Anderson Trio, Ensemble Denada (which got a lot of buzz last night), and then may float for awhile.  See you on Jazz Street!  Come up and say hello if you see me....