About Contact Us ROC Jazz Artist Sites Info for Musicians & Venues JazzRochester T-Shirts
Jazz Around Town: We are T-minus 10 (9?) days and counting to XRIJF...
If it's Tuesday, this must be my picks for Day Five of the Xerox Rochester International Jazz Festival

The "work" week begins and the jazz continues: My picks for June 13 of the XRIJF 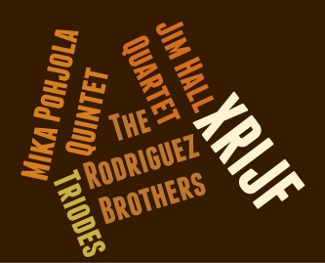 This is the point where, for those of us that are "all nine day"-ers, the collision with the working week begins and the (usually) late nights of Friday-Sunday are beginning to take their toll. While my schedule for Monday, June 13th, at the Xerox Rochester International Jazz Festival may be a bit ambitious, it's within the realm of possibility. Again, as usual, it spans the world of jazz and jazz in the world.

The links below on the artists' name in bold will take you to the artist's page on the XRIJF site. Where available, I've mined a few additional sources and video of the artists from the Interwebs to help you decide whether you want to join me (figuratively, that is...) during my perambulations during the fourth evening of the Xerox Rochester International Jazz Festival on June 13th:

I wouldn't mind catching ex pat Brit John Escreet playing solo at Made In The UK Series in Christ Church and, if I decide to take a break from jazz, head over to Abilene for Professor Louie & The Crowmatix. Of course, there is the XRIJF-ESM Jazz Scholarships Performance at Kodak Hall in Eastman Theatre on Monday as well, which will include the Eastman Jazz Ensemble, directed by Bill Dobbins with special guest Dick Oatts on alto saxophone. One of my father-in-law's favorites Rick Braun will be over at Harro East.  And there is so much more...

Let me know what you're going out so see on the 13th in the comments, or on the Jazz@Rochester on Twitter or Facebook.

Although Robert Rodriguez plays piano with Joe Locke's Force of Four band, his brother trumpeter Michael, who is also great, does not. You may have confused bassist Ricky Rodriguez, who plays on Joe's band, as a brother, but he's not.
At any rate, you know I dig you, Greg!
See you soon.
Tom Marcello

I think I meant to make a change to point that out, but somehow got distracted and posted without it.... My mea culpa (and the right information) is now there in the post. Thanks, Tom.