About Contact Us ROC Jazz Artist Sites Info for Musicians & Venues JazzRochester T-Shirts
The "work" week begins and the jazz continues: My picks for June 13 of the XRIJF
D&C's "Jazz Stories" begin for the 2011 XRIJF

If it's Tuesday, this must be my picks for Day Five of the Xerox Rochester International Jazz Festival 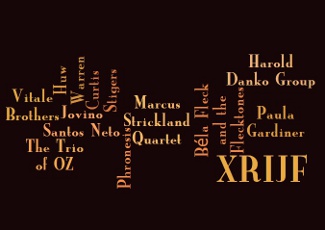 Tuesday at the XRIJF includes  some familiar returning names and some new to me...just another night at the festival. This evening will be one that I float through and perhaps make changes midstream (for me, that can also be just another night at the festival). I'm keeping my main picks to 3, but it is not because there are slim pickings. As you will see below there is just too much to choose, at least when you're trying to soak up as much as you can.

The links below on the artists' name in bold will take you to the artist's page on the XRIJF site. Where available, I've mined a few additional sources and video of the artists from the Interwebs for you to explore so you can decide whether you want to join me (figuratively, that is...) during my perambulations during the fifth evening of the Xerox Rochester International Jazz Festival on June 14th:

I've only set up three Club Pass gigs in the picks for June 14th and might use the "extra" time to drop in on some local acts or see some of Béla Fleck & the Flecktones in The Big House (Kodak Hall).Two of the Club Pass gigs on Tuesday involve local jazz artists, including Harold Danko Group at Max (Danko is currently Chair of the Jazz Studies & Contemporary Media Department at Eastman School of Music and had long associations with Chet Baker, Gerry Mulligan, Thad Jones/Mel Lewis, Lee Konitz and Woody Herman) and the Vitale Brothers at the Viva Italia Series at the Rochester Club (by the way, local bassist Dan Vitale pictured in the XRIJF page is not mentioned in the text of the page, which is from Dan's trumpeter brother Richie--here's a video from an earlier RIJF after hours meetup of the brothers). I'd like to catch the Brazilian sounds of Jovino Santos Neto, Paula Gardiner/Huw Warren at the Made in the UK Series at Christ Church, and Curtis Stigers in Kilborn Hall. Just had too much to choose from....

As Jazz@Rochester's main focus throughout the year is to promote and get you out to hear the great jazz talent we have living and working in and around Rochester (you can find some of their links on my Rochester Jazz Artists page), I'm highlighting the local artists appearing on stages around XRIJF each night. I may not  list them in the "Picks", but that's because I get to see most of them throughout the year and focus during the festival on the artists who come from elsewhere (sometimes not only in terms of distance, but also in terms of being "way out there..."). I encourage you to check them out and find out what great stuff we have to listen to in Rochester all year round (and of course, you know where to find out where and when they're playing....). Here are the local and regional artists for Tuesday, June 14th:

Let me know what you're going out so hear on the 14th in the comments, or on the Jazz@Rochester on Twitter or Facebook.