About Contact Us Join Our Email List ROC Jazz Artists Info for Musicians & Venues Livestreams
Finding my way through Thursday, June 16th at the XRIJF
Jazz Around Town: Where to find live jazz around town OTHER than (or in addition to) XRIJF

Picks for the rest of the XRIJF before I run out of time...

I'm running out of time and steam, and my nose is otherwise to the grindstone, so to end up where I want to be by Friday, when this party gets started I'm condensing my picks for the last two days of the Xerox Rochester International Jazz Festival into this post. I'm going to just give you the picks and a couple of links (and not drone on about them as much—sure you won't mind). 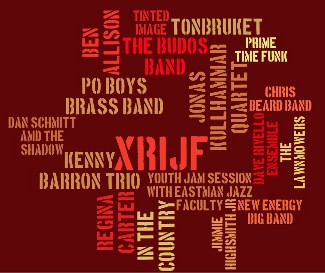 The links below on the artists' name in bold will take you to the artist's page on the XRIJF site. I've mined a few sources and video (in addition to those on the XRIJF site) from the Interwebs to help you decide whether you want to join me (figuratively, that is...) on Friday and Saturday, June 17th and 18th, at the Xerox Rochester International Jazz Festival:

As I went to college in the early 1980s, Elvis Costello & the Imposters have been in my musical life for a long time and I'd love to go hear him in the Big House, but it's sold out and they won't likely even let me take a peek. I doubt he will get thrown out of the place like the last time he was in ROC. Also would like to hear the soul sounds of the Ryan Shaw Band or Jason Yarde & Andrew McCormack "MY DUO" at the Christ Church Made In The UK Series. If you're ready to party, Trombone Shorty is back to bring the funk on the City of Rochester East Ave. & Chestnut St.

You might also want to catch local Dave Rivello Ensemble or a more intimate set with the Jonas Kullhammar Quartet at Max of Eastman Place if you missed them on the 17th (or if you, like many at the RIJF are big fans of Kulhammar...).

As Jazz@Rochester exists to highlight the great jazz talent we have living and working in and around Rochester (you can find some of their links on my Rochester Jazz Artists page), I'm highlighting the local artists appearing on stages each night. Here are the ones for Tuesday, June 16th:

Let me know what you're going out so hear on the last two days in the comments to this post, or on the Jazz@Rochester on Twitter or Facebook.