About Contact Us ROC Jazz Artist Sites Info for Musicians & Venues Buy a T-Shirt!
Jazz Around Town: Summertime ... and the living is easy?
Live Shots: Joey DeFrancesco's B3 and Frozen Custard ...

There's more to Abbott's than frozen custard tomorrow ... Joey DeFrancesco and a Hammond B3 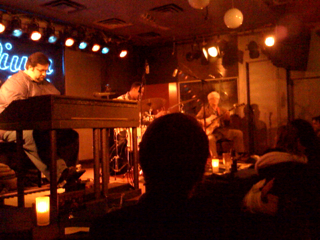 I'm a big fan of the Hammond B3 organ and one of the best on the B3, Joey DeFrancesco, will be in Rochester tomorrow (Sunday) night and will be appearing at a new jazz haunt, Abbotts Custard & Kitchen Keg (yes, that Abbott's...), which has a house B3 along with the trademark frozen custard and (I expect) some other things to eat and drink. DeFrancesco will be there with Buffalo drummer Carmen Intorre and Rochester's Bob Sneider on guitar. Check out Ron Netsky's profile over at City.

The image is one I took while catching DeFrancesco at Iridium in 2009 with Larry Coryell on guitar and Byron Landham on drums.