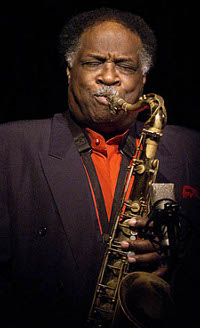 Houston Person has been to Rochester (and Exodus to Jazz before) and now returns on Saturday, February 11th for a concert in the ETJ series. As Exodus To Jazz promoter José DaCosta wrote in his press release Houston Person is returnign to Rochester "with the Boss Tenor crown firmly positioned in its rightful place . . . on his head." Person has recorded more than seventy-five albums as a bandleader on the Prestige, Westbound, Mercury, Savoy, Muse, and most recently HighNote labels. He has recorded with Charles Brown, Bill Charlap, Charles Earland, Lena Horne, Etta Jones, Lou Rawls, Horace Silver, Dakota Staton, Billy Butler, Richard "Groove" Holme among others.

This ETJ event will be at the Lutheran Church of the Reformation, with the concert beginning at 8:00 pm (it will include two one-hour sets). Doors will open at 7:00 pm. Tickets: Patron, $35 (includes a “Meet & Greet” with the quartet beginning at 7:00 pm); Premium Seating, $25; and General Admission, $20. Tickets are available at BrownPaperTickets.com and all Wegman's stores. Additionally, since it's mid-February, there is a “Bring Your Honey, Save Some Money” Valentine Special. Buy one ticket for yourself and save 50% on the ticket for your Valentine when two tickets are ordered at Brownpapertickets.com using the discount code: VALDAY2.