About Contact Us Join Our Email List ROC Jazz Artists Info for Musicians & Venues Livestreams
Jazz Around Town: What ROC jazzers would you put in the Hall of Fame?
Jazz Around Town: Warming up weather-wise and jazzwise as well.... 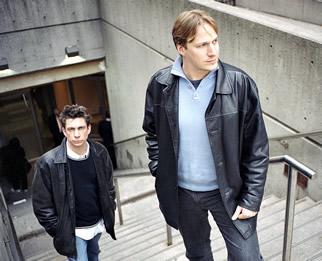 Led by co-founders Rob DeBoer and Tony Grace, Toronto-based Four80East makes their highly anticipated return to the Exodus To Jazz series. With a heavy-groove sound characterized by distinctive melodies, their sound "lies at the forefront of what has been called the nu jazz movement—taking the best of contemporary jazz and pop styles and aligning them to produce an improvisational dance-infused sound." In addition to garnering a Smooth Jazz Awards nomination—“Best International Group”—the group was honored by being invited to perform at the Smooth Jazz Awards ceremony in October 2010. 480East draws from a variety of sources, including found sounds, field recordings and sound effects.

Opening for Four80East are my buddies in Paradigm Shift with their signature groove jazz sound. This group of leader/guitarist Mel Henderson, keyboardist Gerry Youngman bringing that B3 sound, and always inventive drummer Sean Jefferson. Paradigm Shift maintains an active national and international touring schedule, as well as playing all over our area and Western New York.

Based on feedback from a survey of Exodus To Jazz patrons, ETJ is focusing on trying to match each group to a venue that has the best acoustic characteristics for the group. With this as a guide the next ETJ season (September 2012 to May 2013), will see three of the twelve concerts at the Water Street Music Hall, three at the Hochstein Performance Hall, and six at the Lutheran Church of the Reformation. This will be the inaugural concert at Water Street.