About Contact Us ROC Jazz Artist Sites Info for Musicians & Venues JazzRochester Merch
XRIJF 2012: And now for something completely different....
Jazz Around Town: I'm out of town, but there's still jazz in Rochester...

Not a big surprise after my experience with bassist Christian McBride on April 14th when he joined Ullyses S. Owens here for the Exodus to Jazz series, including a nice dinner at Henry B's with McBride and the members of the band and some cigars after the gig at Havana Moes. But anyone who was at the concert at Hochstein that night and heard the band close up the concert with Cherokee, with it's alternating steaming and screaming lines, sat in awe of his playing. 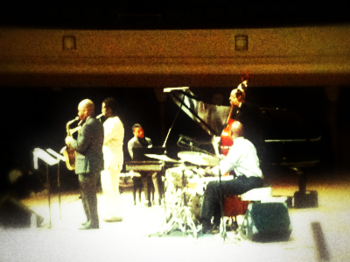 McBride will likely bring some of the guys from that ETJ gig back with him for his gig here as the usual cast of characters in Inside Straight includes pianist Christian Sands (who was a monster on the ETJ stage) and the incomparable Mr. Owens.

You don't believe me about Cherokee?  Here it is with his trio in a 2009 trio recording from the Bratislava Jazz Festival, including Peter Martin and USO:

I also thought you might like this full concert recorded by National Public Radio with Christian McBride and Inside Straight at the Village Vanguard.