I have heard Jacob Fred Jazz Odyssey more than once, once in an odd pairing with Al Dimeola at Water Street and a couple of times at the jazz festival. There is no Jacob and no Fred, but their music is an odyssey and I love exploring it each time I hear them. They've opened for jam band "gods" Phish, but also are known to play Thelonious Monk, Abdullah Ibrahim, Rahsaan Roland Kirk, and Louis Armstrong. Each member of JFJO is a consumate musician and their intensity and seemingly telepathic communication on stage sometimes leaves you there sitting, slack-jawed. 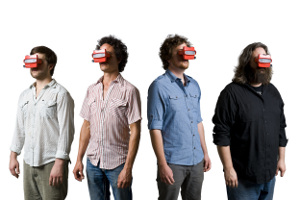 You never know what these guys are going to do. I don't think they've played the same thing twice in the 3-4 times I've heard them. I'm thinking they will bring at least portions of their latest project The Race Riot Suite to this year's festival. For their 21st album, Jacob Fred Jazz Odyssey has reached into a dark part of their hometown Tulsa’s history. The piece waswritten, arranged and orchestrated by Chris Combs, and is a long-form conceptual piece that tells the horrific story of the 1921 Tulsa race riot during which, as set out on the site's page for the album "[t]he oil-elite, civic government and local press colluded to take advantage of a racially tense climate in Jim Crow-era Oklahoma, resulting in the death of hundreds of black Tulsans and the destruction of an entire city district." Through jittery, propulsive rhythms and melodies, the Suite is intended to be an onlooker’s journey through that night that nearly destroyed the one of the country’s most thriving black communities. The band cites influences as diverse as iconic jazz and classical artists like Charles Mingus, Duke Ellington, Ludwig van Beethoven and Gustav Mahler, as well as, modern artists, including Radiohead, The Dirty Projectors, Fight the Big Bull and Animal Collective in the conception of the recording. Time Out New York said that "12-part suite pinballs between majestic melodies, free improv and ragged New Orleans rhythms, sometimes all within the same song…expect a heavy dose of history, but an even heavier dose of forward-looking, down-home jazz." If they are doing this piece at their show on, in addition to the permanent line-up of Combs (lap steel), Brian Haas (piano), Josh Raymer (drums) and Jeff Harshbarger (bass), the quartet may a horn section.

Here's a link to a Downbeat article on the project, Meditation on a Riot. The JFJO have also linked to a video of them performing a Prelude from the piece in October 2011 (there are tons more videos of them playing on their site):

Check out my other picks for the 2012 XRIJF as they come out on the blog or by clicking on the “XRIJF Picks” Category in the middle column. Join (or start) the conversation on the Jazz@Rochester Facebook page or on Twitter. Use the hashtag #XRIJF so others can follow your tweets. I've also created a Twitter list of jazz artists/groups appearing at this year's XRIJF (there's a feed in the middle panel).

In a fan email a few weeks ago they listed the Rochester show as being a full performance of the Race Riot Suite.