I've "known" Sunna Gunnlaugs for several years now, so this pick is personal. OK, we've only been "friends" on Twitter, but we have exchanged some messages and I'd like to think that I gave her the idea of applying to play at Rochester's festival. I've been listening to her music since the time we connected. Sunna and her trio a great fit for the Nordic Jazz Now series that has become such a popular part of the festival, being from Iceland and all, and her sound is made for the wonderful sonic climate of the Church of the  Reformation. 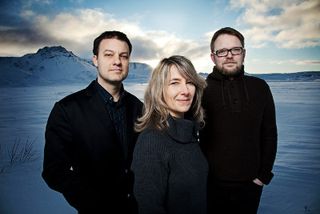 Sunna Gunnlaugs began recording a few years after graduating from William Paterson College in NYC in 1996, and now has released eight CDs as a leader, which have consistently met with critical praise. All About Jazz wrote that "Gunnlaugs proves that jazz can have a wider appeal without losing integrity." She is influenced as much by American pianists as Bill Evans and Keith Jarrett as by Scandinavians like Bobo Stenson and Jon Balke. The Washington Post described her music as possessing "such timeless virtues as lyricism and grace ... elegantly bridges soul-searching passages with uncluttered swing." Sunna Gunnlaugs has reaffirmed the praise she's received on previous outings on her latest CD, Long Pair Bond

, which features fellow Icelander bassist Thorgrimur Jónsson and long-time partner Scott McLemore on drums. Long Pair Bond is Sunna Gunnlaugs first trio album since her debut in 1997. Gunnlaugs is an independent jazz artist who has been funding her own CDs through KickStarter. As Stephan Moore of the blog Jazz Wrap put it in reviewing Long Pair Bond as one of the best CDs of 2011: "As an independent artist, Gunnalaugs has the liberty of writing, produced and recording when and what she pleases. I think this allows the really artist's personality to shine through. . . . On the musical side, after continually listens over the last month, I really have to repeat, Long Pair Bond is phenomenal." Gunnlaugs' stop in Rochester is part of a bi-coastal tour of the US in June to promote the new CD.

As an independent artist, Sunna Gunnlaugs has learned a lot about promotion using the interwebs. In addition to her website, you can find her on Twitter, Facebook, even MySpace. I also found that Jason Crane interviewed Gunnlaugs in 2010 on his podcast The Jazz Session after she released her CD The Dream. But wait . . . there is more, including a live concert with the trio that you can stream (and download as high quality files)....

Although a few years old, here's Sunna Gunnlaugs solo doing A Garden Someday at the Nordic House in Reykjavik, a part of the 2009 Reykjavik Jazz Festival:

Here is a quartet doing Tunnelvision at the Songwire studios in Richmond last year:

I bet you're saying ... "at least it's not another trumpeter this time!" These Picks posts are not in any particular order and I'm going to be mixing them up from here.  If you'd like to check out my other picks for XRIJF, you can do so by clicking on the link XRIJF Picks under Categories.