About Contact Us Join Our Email List ROC Jazz Artists Info for Musicians & Venues Livestreams
Jazz Around Town: Still hearing no jazz here in KS (except on my iPad), but here's your jazz in Rochester
Jazz@Rochester Picks for XRIJF 2012: Terence Blanchard Quintet 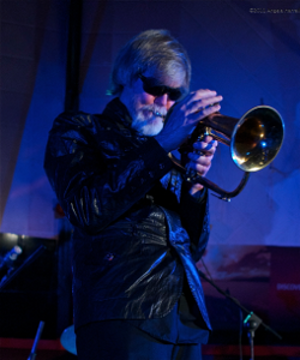 I'm looking forward to trumpter Tom Harrell bringing his Ravel/Debussy project to Kilbourn Hall for the 2012 XRIJF. I loved Harrell's last appearance here at the jazz festival in 2006 and have added a few of his discs to my collection since. Harrell is recognized as one of the most creative and uncompromising jazz instrumentalists and composers around with a discography that spans over 260 recordings and more than four decades. He is a frequent winner in DownBeat and JazzTimes magazines' Critics and Readers Polls, has been nominated for a Grammy Award, and also was nominated for Trumpeter of the Year for the 2011 Jazz Journalists Association Awards.

Tom Harrell's new project, expanding his quintet into a chamber ensemble with strings celebrates a special affinity that Harrell believes jazz has to the impressionist works of Debussy and Ravel. His interpretations of these two composers' pieces—performed by an nonet consisting of violin, cello, flute, tenor sax, his trumpet/flugelhorn, piano/rhodes, bass and drums—while finding their foundation in classical music are fully expressed through jazz.

Here's Brian Pace's Pace Report with an interview with Harrell on the Debussy/Ravel project:

And the ensemble playing a festival in November 2011:

I appreciate your recommending my concert - but I do wish that journalists and bloggers stop feeling compelled to bring up my mental illness, which really does not have anything to do with my musical output. The PBS interview piece with Arun Rath is one of the most regrettable things I have done, as I was misled by his intentions. It seems that the illness has consistently become the headline as opposed to a footnote. Quite frankly, I am tired of it.

Mr. Harrell, frankly I was torn about adding that and now see I made the wrong choice. I don't believe it was a headline to my post, but rather a postscript, to explain to folks coming out to hear you who don't know your history. However, as you note, that has been done elsewhere too much. I want to respect you and your feelings, so I have removed the last paragraph and the video (I have little time to create these and perhaps did not watch Arun's piece closely enough to evaluate it). If you have a video interview of which you're proud, I'd be happy to cut it in later if you provide me a link.

I'm not like a some bloggers who will not change things even when we're wrong; I'm not trying to be a journalist here, just helping promote jazz and jazz artists in my area. It's my site and I'll do what makes sense to me.