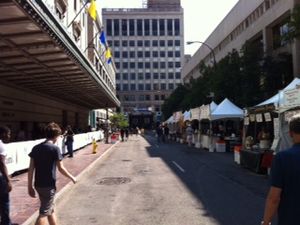 Beginning of the day...

I waited a bit to long to leave for the festival on Friday afternoon. Washed the dishes as a favor for my "jazz widow". When I'm starting an XRIJF day out in Kilbourn Hall, as I planned to this time, I try to get down to the festival site early enough to aget in line before it goes around the corner on Gibbs and heads down the alley. I thought I was early enough today, but the line for Christian McBride was half way to Swan Street by the time I arrived at 4:00 pm. After awhile in line, it started to move well before the usual time, soon to find that it was not an early entry into Kilbourn.The 6:00 pm show had been cancelled as McBride couldn't get out of NYC due to weather and a fire in an airport in New Jersey. So not too late after all.... Both of McBride's concerts were eventually cancelled. I don't remember this happening before for a Kilbourn concert.

At the jazz festival, sometimes unanticipated events lead to a good outcome. I knew I wanted to see Goran Kafjes and the Subtropic Arkestra, but McBride dropping out opened up a couple of other options. Some were taken off the board by the folks in the line ahead who, of course, immediately headed to another line. I eventually went to see Get the Blessing and then L'Orkestre Des Pas Perdues in the Big Tent, before heading over to the Church of the Reformation. Due to the diversity of the offering, there's always another option and you may discover something new.  I also was able to sit down at the Baked and Carved in Salinger's and have a nice sandwich.

First out was Get The Blessing. I had been able to catch some of their act last time they were at the XRIJF, but this time was able to stay for the whole concert and really enjoyed their trippy style with very intricate guitar or bass of Jim Barr interweaving into a groove with the drummer (sorry, but I didn't catch his name—he was great—who was filling in for the regular drummer Clive Deamer, who wasn't there because he's on tour with Radiohead). These two built a foundation for the trumpet and effects of Pete Judge and sax (and effects) of Jake McMurchie to weave their own sounds into, making sometimes for a pretty complex tapestry. I do recall Jim Barr's wit from last time. He announced after their first tune that they would be "playing two types of music--one scientific and the other sentimental rubbish" and then proceeded to tell us which (although they tended toward the scientific and the "sentimental rubbish" was pretty obvious... well at least the sentimental part, it wasn't rubbish). Picked up their OCDC disc on the way out.

Before heading over to the church, there was a bit of time so my friends and I headed over to the Big Tent for L'Orkestre Des Pas Perdues. This was a big group with a big sound that made you want to move (as in dance, although me dancing is not a pretty sight, so I just bounced a bit). This high energy group is playing the Jazz Street stage tonight. 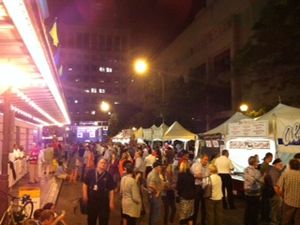 Still going after it was all over...

Yesterday, Goran Kafjes and the Subtropic Arkestra was described by a wit on Twitter as sounding something like Miles Davis' electric band covering The Meters, a legendary funk band from New Orleans, and there was a lot of buzz about them elsewhere on the Twitter stream.  Although I already had decided to check them out, that sealed the deal for my friends and I (plus we all are fans of Jonas Kulhammar who plays with the Arkestra). They did not disappoint and received raucous cheers and and standing O at the end of their set, a fair number of which may have been at the first set. Although different, their compositions were also intricately interwoven pieces that worked around a motif, often played by the guitarist or keyboardist, and with a sound that pulled in influences from around the world. After seeing him play as a leader at several jazz festivals, it was interesting seeing the usually crazy Kulhammar step into the background and support Kafjes and his other mates with his excellent saxophone and flute work.