About Contact Us ROC Jazz Artist Sites Info for Musicians & Venues JazzRochester Merch
Penultimate choices ... Day 8 of XRIJF
Jazz Around Town: Now that XRIJF is over, there's still jazz to hear in Rochester ...

End of the XRIJF road for another year ... Can you believe it?

OK, I'm sated...my ears are full.  I've put on some poundage with beer and street food. I always reach a point (and I think I even reached it earlier this year) where I've heard so much fantastic jazz and other musics and been exposed to so many diverse musical talents at the Rochester International Jazz Festival that I just float around, going where my whims or some other compelling force (such as poutin last night at Abilene). Reached that point maybe Thursday?  Floating is the best way to get at the heart of this festival where it is, as John Nugent says, "not who you know, but who you don't know." 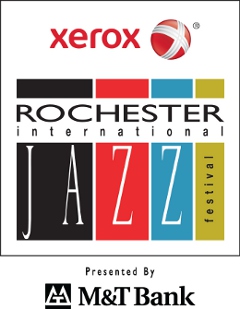 Starting out, I plan on incorporating "where you don't know" into it by finally getting into what I have heard is the nearly perfect acoustics of Hatch Hall to catch pianist Joanne Brackeen play.  Consistently listed as one of the top jazz pianists, I have had albums of hers in my collection since the 80s. Hadn't had a listen in quite a while, so pulled out her Snooze LP from the 1970s (with Cecil McBee and Billy Hart) to get reacquainted. As I had remembered, Brackeen plays with lightning speed and authority, her interpretations full of both jagged complexity and lyrical beauty.

Then I think I'll take in one more UK artist in the Made In the UK series at Christ Church with the Arun Ghosh Quintet. Clarinetist Ghosh incorporates his South Asian roots in a heady mix with jazz and other musics.  I've loved this mix in other artists such as Vijay Iyer and Rudresh Mahanthappa. Here's a video of him performing Aurora from his CD Northern Namaste.

Other than those, I'm floating again.  If I find myself needing a shot of straightahead, I'll head over to Xerox Auditorium for the wonderful Victor Goines Quartet or to Rochester Club for Mario Romano Quartet Featuring Pat LaBarbera. I'm also intrigued by the band Locarno, who will be playing in the Big Tent. Growing up in Southern California (@30 miles north of San Diego), the love of the music of Mexico and Latin music in general have been a constant. I'm not familiar with this project of Canadian band Paperboys' frontman, Tom Landa, but for me the music, described as "part Mexican but with strong doses of Cuban Son, Folk Music, Pop and Funk" cannot go wrong. Listening to their Una Mas y Ya Nos Vamos album on Spotify right now and loving it. Here's a YouTube video of Locarno performing last year in Vancouver.

Caught the first show of Victor Goines... great band, even if Victor seemed to be laying back a bit... and then took in the second show of Arun Ghosh... my favorite of the day. A blend of rushing music, almost trance-jazz with an Indian undertone... the time flew by very fast.